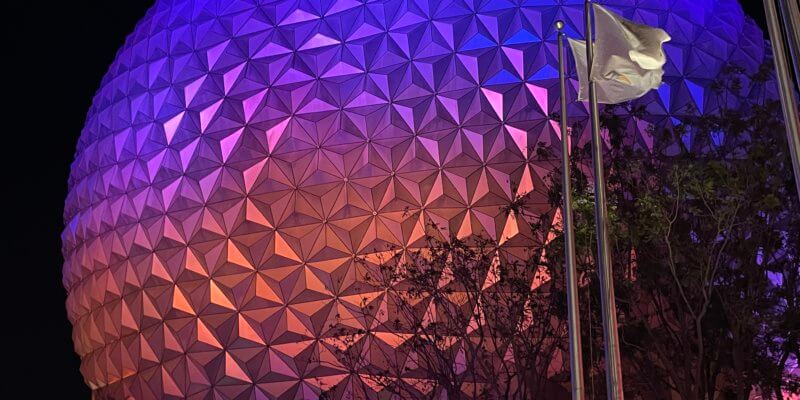 Spaceship Earth has always been a stunning centerpiece to EPCOT. Considering what transformation the structure is being given for the 50th anniversary, it seems that the golf ball is getting ready to look even more beautiful than ever.

In case you didn’t know, Spaceship Earth is going to now light up from the exterior of the structure, illuminating outwards, as opposed to lights being projected on it. For the 50th anniversary celebration at Walt Disney World, Disney Imagineering is revolutionizing Spaceship Earth by adding points of light between each connecting triangle so that the ball can eventually shimmer.

All four Disney Parks are set to transform; at Magic Kingdom, Cinderella Castle is already quite decorated, the Tree of Life will seemingly have projections at Disney’s Animal Kingdom; however, we have not seen any changes at the park as of yet, and at Disney’s Hollywood Studios, Tower of Terror will also shine, but currently, the hotel still looks quite abandoned.

That is why it is exciting to see how far along EPCOT is in the process of Spaceship Earth’s transformation! Now, it seems that the points of light have all been fully installed on Spaceship Earth, as you can see in the below photos.

Notice how, between each triangle, there is now a small sphere popping out, almost acting as if it links all the pieces it touches together. These are all the points of light that have been added to Spaceship Earth.

Here is a closer shot of what each light looks like.

As you can see, the change is not invasive to Spaceship Earth’s overall look. However, the sheer quantity of lights will likely reveal a stunning result once finally lit!

At the moment, Disney has not officially revealed that the lighting package is complete. Still, after walking around all of Spaceship Earth, it seems the installation process of each light is likely complete, as there were no noticeable gaps. It is likely that Disney still has some finishing touches, testing, and programming to complete.

That being said, considering there will be hundreds of lights shining off the ball, I personally think that this may be the most jaw-dropping and gorgeous change that we will see at Disney World this year. If I were to guess, I would say that Disney may not make the reveal until October 1, which is the start of the anniversary celebrations, as well as the opening of Remy’s Ratatouille Adventure. Considering how much of Cinderella Castle has already been revealed, it would make sense for Disney to want to keep some of the other transformations as more of a surprise. But again, this is all purely speculation on my part.

When do you think Disney will reveal the changes to Spaceship Earth? Do you think the new lighting package is going to be a good or bad change?

If you want to be at the 50th anniversary celebrations, you need to get booking today to ensure you arrive on time in Orlando! You can visit Magic Kingdom, Animal Kingdom, Disney’s Hollywood Studios, and EPCOT to celebrate with Mickey Mouse in Orlando. Disney Park Pass reservations are selling fast, so click here to get started!

Comments Off on See the Latest Photos of Spaceship Earth’s Magical Transformation!