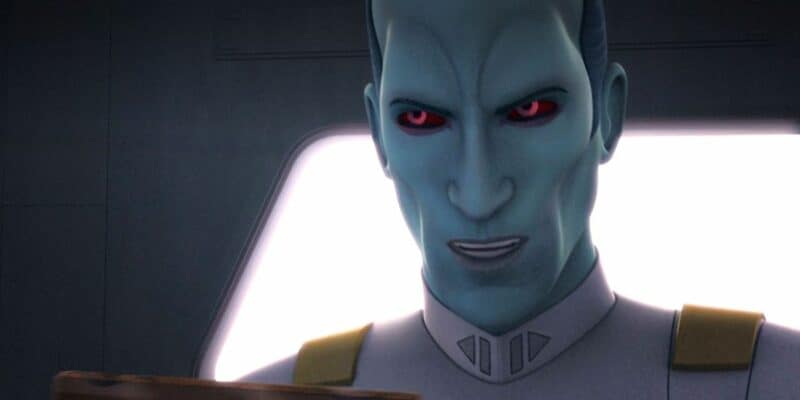 Many Star Wars fans have been waiting to see Grand Admiral Thrawn in live-action since he first appeared in Timothy Zahn’s Thrawn novels in the 1980s. And, those who missed the novelizations have been waiting to see the fan-favorite villain in live-action since he played a key role in Dave Filoni’s animated series Star Wars Rebels., antagonizing Hera Syndulla (Vanessa Marshall), Ezra Bridger (Taylor Gray), Kanan Jarrus (Freddie Prinze, Jr.), Sabine Wren (Tiya Sircar), and the rest of the Ghost ship crew.

Thanks to The Mandalorian Season 2, Episode 5 (“Chapter 13: The Jedi”) — directed by none other than Filoni himself — Star Wars fans discovered the biggest surprise of the entire season, except for that Jedi Knight Luke Skywalker (CGI Mark Hamill) cameo in the finale episode.

After titular Mandalorian Din Djarin (Pedro Pascal) teams up with Anakin Skywalker’s former Padawan Ahsoka Tano (Rosario Dawson) against all odds — as he says, “A Mandalorian and a Jedi? They’ll never see it coming.” —  to defeat Corvus Magistrate Morgan Elsbeth (Diana Lee Inosanto), Elsbeth confirms that she’s not the one pulling the strings after all.

The character is expected to make his first live-action appearance in Mandalorian spinoff Ahsoka, which will likely also introduce the World Between Worlds to the “Mando-Verse”. And, now, additional details have emerged, one of which is likely to thrill Star Wars fans who love the blue-skinned antagonist:

“Grand Admiral Thrawn is described as a grand admiral in the Imperial Navy and unequivocally, the most clever and calculating of the Emperor’s followers. Thrawn is tall, strong, with a solid build. He is a member of the Chiss alien species meaning he is a blue skinned humanoid with glowing red eyes. Thrawn dons a white uniform befitting his rank with the Empire. Grand Admiral Thrawn is described as a series lead.”

This description tracks with what fans already know from Rebels, but the key verbiage is that Thrawn will be a “series lead.”

Prior to this new report, it was unknown if he and Tano’s fellow Jedi Knight Ezra Bridger — who is all but confirmed to be played by Aladdin (2019) star Mena Massoud — would be major players in Ahsoka, or simply make cameos throughout the season. The supposed premise of the show is that Tano is searching for Bridger, who sacrificed himself to disappear with Thrawn in the Rebels series finale.

The fact that Thrawn is seemingly going to be a lead character also opens the door for fan-favorite Star Wars Legends character Mara Jade Skywalker, who was also introduced non-canonical Thrawn Trilogy of novels. The former Emperor’s Hand assassin knew Thrawn well and has been rumored to appear in The Mandalorian saga moving forward, too.

At this time, Ahsoka and The Mandalorian Season 3 do not have debut dates. The Book of Boba Fett will debut December 29, 2021.

It also remains unknown if Rebels voice actor Lars Mikkelsen, or someone like MCU stars Robert Downey, Jr. or Benedict Cumberbatch, will play Thrawn. Though it is worth noting that Cumberbatch has called the role a “straight no”.

Are you excited to see Grand Admiral Thrawn play a big role in the Star Wars story moving forward?