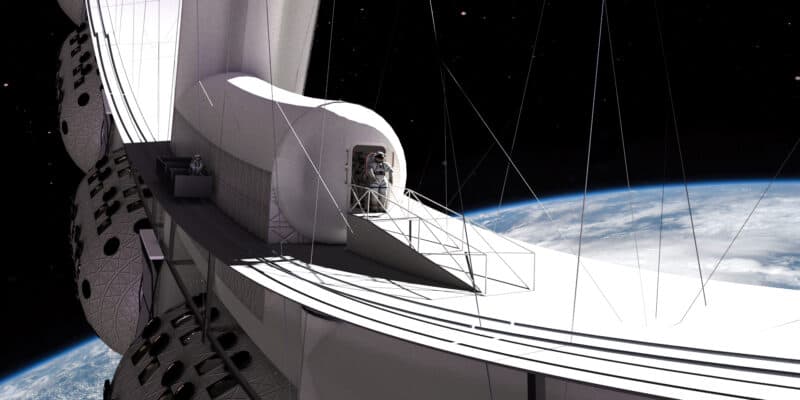 Now, though, it seems that Star Wars fans and space nerds alike will soon be able to blast off in a real-life “Galactic Starcruiser” thanks to a new space hotel project. Per a report about the Orbital Assembly Corporation’s ambitious endeavor:

The Orbital Assembly Corporation has plans to open its first hotel in space in 2027. The US-based company has been exploring this concept since 2019 and with the recent strides made to travel through space within the last couple of years, tourism into the solar system isn’t just for sci-fi movies anymore.

The article went on to note that:

…[Orbital Assembly] is now spearheading to launch two space stations with tourist accommodation. The first is the Voyager Station which is being designed to accommodate 400 people and to open in 2027. The more recent designed Pioneer Station, which will accommodate 28 people is expected to be ready in three years [2025].

Voyager, the larger of the two hotels, will operate like “a spinning bucket of water,” per Tim Alatorre, Orbital Assembly’s COO.  In a recent interview, Alatorre told CNN Travel that, although it is extremely expensive to travel to space right now, “The goal has always been to make it possible for large amounts of people to live, work and thrive in space.”

Related: Baby Yoda Was a Stowaway on an Actual SpaceX Mission

The larger Voyager model will ultimately be able to accommodate 400 Guests, while the smaller Pioneer station is expected to house 28 guests in customizable pods.

“We’ve been able to develop a safe, secure, and reliable modular station that will generate revenue and profitability from both the tourist and commercial sectors sooner than our competitors who are adhering to NASA timetables.”

She added, “Multiple revenue streams from commercial, research and tourism markets will enable us to subsidize the travel market for a one to two-week stay. While launch costs continue to be a barrier, we expect tourists will be motivated to plan shorter, or more frequent, stays as space travel becomes less expensive.”

Before the Starcruiser officially opened on March 1, 2022 marketing efforts for the wildly pricey Disney Resort hotel fell flat. Disney Parks fans went so far as to call the design of the starship “pathetic” and Disney executives and Imagineers are reportedly aware of the Star Wars fandom’s collective “horror” regarding how the hotel was initially presented.

Nonetheless, Disney has maintained that the experience will leave Guests “blown away” once they set foot on the “spaceship.”

Do you want to travel to space?