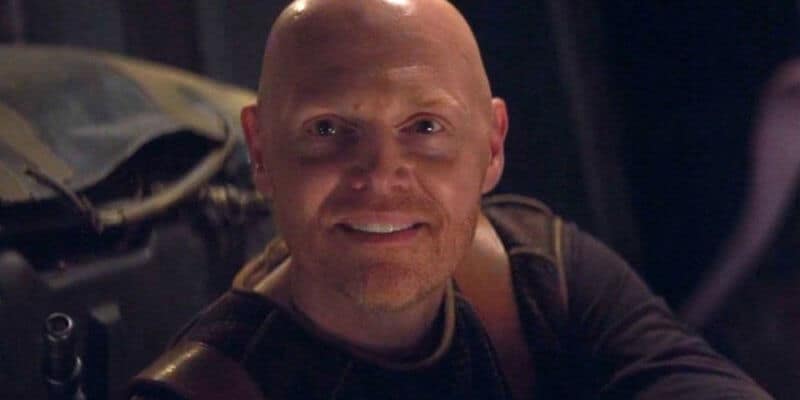 Bill Burr has made it clear he wants Gina Carano to return to Star Wars.

Burr is a well-known comedian who also got the chance to be involved with Pedro Pascal‘s The Mandalorian as Migs Mayfield, who ends up trying to kill Din Djarin in Season 1 and then is forced to help him in Season 2.

Burr weighed in on Gina Carano’s situation early on and said that he felt “scared” to say anything and end up getting fired. He didn’t agree with Disney’s decisions, but he chose not to say anything in support of Carano. Fans saw Carano play Cara Dune, an ex-shock trooper from Alderaan who fought with Mando for several episodes in both seasons.

After the actor compared Republicans to Jewish citizens under the Nazi Regime, she was fired and Lucasfilm has no intentions of bringing her back for any projects. Originally, it was rumored Carano would be getting her own spinoff, Rangers of the New Republic, but that has been shelved.

Now Burr has reflected back on his time on The Mandalorian with The Hollywood Reporter and admits he is disappointed with how Carano was treated:

“No, I thought it was funny that the liberals proved her point. They just use outrage because they don’t like your politics. As someone who considers himself liberal, it’s disappointing to see the left become how the right used to be when they went after the Dixie Chicks after they criticized George W. Bush. There’s not a lot of people like that — most are just trying not to get in trouble — but there’s this small collection of lunatics — either on the right or the left, at any given moment – that cause hysteria. And now there’s so many [media outlets] that want eyeballs, they make money off advertising, that they give attention to these crazy fringe people.”

Burr also added he believes no one should have their way of living to be destroyed because of what they believe:

“The whole thing with Gina: You can’t chime in when the shit’s happening, because then you cause static for other people on the [show]. That somebody’s opinion — or their political beliefs — makes people try to destroy their ability to make a living, it’s f**king bizarre to me.”

Now, The Mandalorian Season 3 finished filming not that long ago and is expected to release sometime at the end of 2022 or perhaps the start of 2023. Fans will learn more about what will happen with Din Djarin and Grogu soon enough as Star Wars Celebration will give Star Wars fans some updates on what to expect.

Do you think Gina Carano should return to Star Wars? Do you agree with Bill Burr?