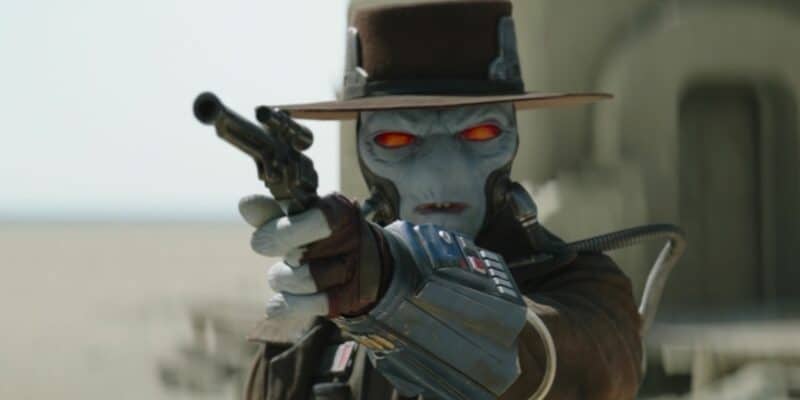 Since appearing in Dave Filoni’s legendary Clone Wars series, bounty hunter Cad Bane has been a fan-favorite throughout the Star Wars universe. It was only a matter of time until the character appeared in a live-action series, but how Lucasfilm pulled it off is an entirely different summit to climb.

To the praise of virtually every Star Wars fan, Cad Bane (Corey Burton/Dorian Kingi) made a groundbreaking, out-of-this-world debut in episode six of The Book of Boba Fett.

Proving he’s still got his unbeatable skills with his dual LL-30 Blastech pistols, the menacing anti-hero (very Lee Van Cleef-like) looked perfect in the Tatooine desert. But, some fans weren’t happy with how Lucasfilm adapted the animated villain into live-action:

One fan jokingly responded to all of these claims, supposedly “fixing” Cad Bane’s live-action appearance:

Cad Bane was born in the year 62 BBY (Before the Battle of Yavin), decades before the fall of the Jedi Order and even before Emporer Palpatine/Darth Sidious executed Darth Plagueis the Wise.

Having survived the Galactic Civil War in his deadly profession, the ruthless bounty hunter would be around 71 years old by the time Star Wars fans see him in The Book of Boba Fett — which takes place in 9 ABY.

In human terms, that would make Bane roughly 100 years old! Adding the bumps, bruises, and injuries he’s sustained from when fans last saw him in The Bad Batch (only months after Order 66 and his last appearance in The Clone Wars) to now, there will undoubtedly be some discrepancies in his live-action interpretation.

In the video below, Star Wars YouTuber Star Wars Theory perfectly explains why Cad Bane is lighter in skin tone and more:

The Duros, Bane’s species, considered anyone within their molecular makeup that lived past 69 years would be considered “elderly.”

As a result, the Cad Bane fans see in The Clone Wars would be in his middle ages, while The Book of The Mandalorian Cad Bane would be far past the retirement age.

While many claims that his face isn’t long enough or his mouth seems off, the Clone Wars Cad Bane has aged drastically due to his various trials throughout the Galactic Empire’s reign.

Given that Bane’s been on Tatooine contracted by the Pyke Syndicate long enough to supposedly wipe out Boba Fett’s (Temuera Morrison) tribe of Tusken Raiders and know that Cobb Vanth (Timothy Olyphant), the twin suns, would also have aged the Duros bounty hunter.

Considering what toll the Clone Wars and more had on Obi-Wan Kenobi’s transformation into Ben Kenobi in the Star Wars galaxy, the wear-and-tear of years of combat and going through the dune seas to protect a young Luke Skywalker (Mark Hamill) makes it clear that Bane has undoubtedly made some modifications to his body, including his external lungs (that prevent Force-users from choking him!).

Do you like how Cad Bane looks? Let us know in the comments below!