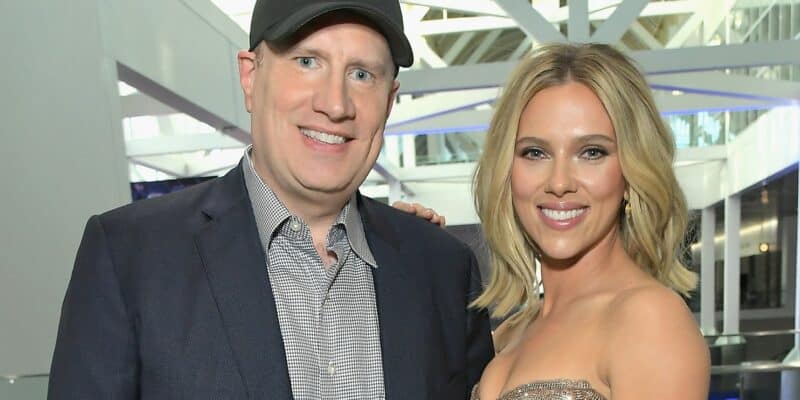 It’s no surprise that Scarlett Johansson has been a popular name in the news recently. We’ve watched the back and forth that went along with the controversial lawsuit between Disney and Johansson over the Black Widow film release. With the lawsuit settled and Disney and Johansson coming to terms, we are looking forward to Johansson’s involvement once again in Disney’s Tower of Terror film project. It seems Marvel is still very much part of Johansson’s future plans as well, as Kevin Feige teases of a “top secret” project.

The Marvel Cinematic Universe Black Widow star, Scarlett Johansson, became the 35th recipient of the American Cinematheque Award on November 18, 2021, during a ceremony held at The Beverly Hilton. Marvel Studios President Kevin Feige was among those in attendance. Not only did he praise Johansson’s talent, but teased there is more to come for Johansson… and it has nothing to do with her Black Widow character.

According to Deadline, “Marvel Studios President Kevin Feige, who praised her (Johansson) for her “talent,” “vision”, intelligence and savvy, both as an actress and a producer, also teasing a “top secret Marvel Studios project” on which the studio is reteaming with the actress, which he said has nothing to do with her Black Widow character, Natasha Romanoff. Feige noted that Johansson, who became the first Marvel actor to exec produce one of the studio’s movies with Black Widow, will also serve on the upcoming project as a producer.”

Scarlett has lent her talent and star power to the Marvel Cinematic Universe for over a decade. That she’s chosen to play a key part in it for so many years, I am extremely grateful for,” the MCU producer said. “Working with [her] has truly been one of the most memorable and rewarding collaborations of my career.”

What do you predict will come from this top secret Marvel project? Let us know in the comments!