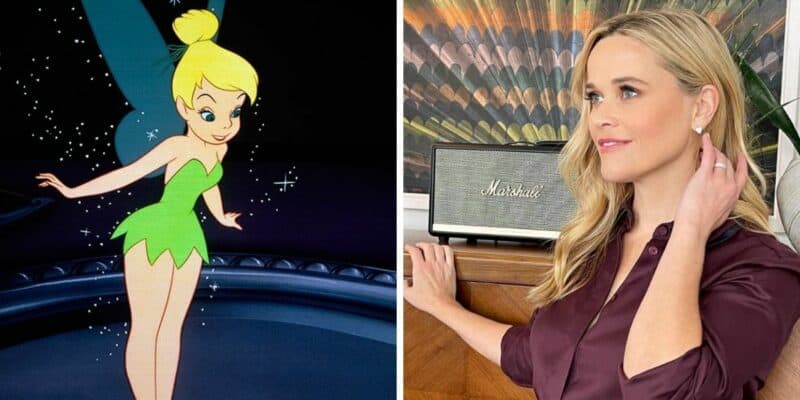 With faith, trust, and a little bit of pixie dust, fans of Tinker Bell are ecstatic as the iconic fairy could be getting another Disney movie — produced by the one and only Reese Witherspoon!

Prior to the announcement of Peter Pan and Wendy, which is coming to Disney+ next year and features Yara Shahidi as Tinker Bell, another project was in the works.

The other project was set to tell a story from the perspective of Tinker Bell and was simply titled Tink; however, once the news came that Peter Pan and Wendy would be coming, no new news was released surrounding Tink, and many thought the project was no more.

The good news is now, thanks to new reports, it seems that Tink is not only still alive, but could possibly be in the very early stages of development!

According to DisInsider, they were able to obtain a new production sheet, which revealed that the Tink project was recently assigned a new writer within the last year. Maria Melnik is listed as the new writer, who is best known for her work on both Escape Room films as well as American Gods.

On top of that proof that the project still has a pulse, the sheet also features several incredibly detailed character breakdowns. In addition to giving us insight into what other characters the story will center on, they also do a fantastic job of framing the planned plot for the film.

For example, Tinkerbell’s character breakdown not only describes her and her association to Peter Pan but indicates that the story will explore her relationship prior to Peter meeting Wendy.

The unofficial synopsis states that after Peter becomes gravely injured, “Tink” (as she’s referred to), makes a deal with the head fairy (named Variel Tarin) to save his life. This results in Peter staying a 9-year-old forever and her losing her voice. The story doesn’t end there though. After Peter meets Wendy, Tink becomes incredibly jealous. However, when Hook kidnaps Peter she and Wendy must team up to save him before it’s too late.

As far as if Reese Witherspoon is still attached to the project — the answer is yes! Witherspoon is still listed as the film’s producer; however, DisInsider notes that “it’s not made entirely clear if she still plans to star should the film come to fruition. All of the roles have no actors attached.”

Despite this newly released information, the Tink project could still be scrapped simply due to the fact that another live-action film — Peter Pan and Wendy — is in the works. Inside the Magic will continue to update you as we get information regarding the possible Tink film.

Peter Pan and Wendy is scheduled to be released on Disney+ in 2022. This live-action Disney+ film will star Alexander Molony as Peter Pan, Ever Anderson as Wendy, and Yara Shahidi as Tinker Bell.

Do you want to see Disney move forward with the Tink project? Let us know in the comments below.