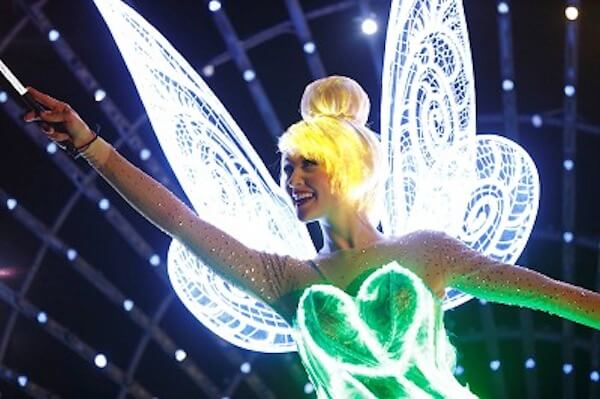 Let’s sweep up a little pixie dust today and look at the beloved character of Tinker Bell. This Disney fairy has been sailing over Cinderella Castle (at 189 feet up!) and Disneyland’s Matterhorn at Disney Parks for many years, bringing joy to all those watching the nighttime spectacular. But how exactly does she make this magical journey? Let’s take a look (partially) behind the scenes at Tinker Bell’s flight.

Tinker Bell’s Flight… How Does She Do It?

The very first Tinker Bell flew (on a cable line) in Disneyland Park in the summer of 1961. But she didn’t fly over to Walt Disney World Resort until the mid-1980s, where she first was seen in a holiday show. However, the response to her was so huge, she was then installed into the classic nighttime spectacular, “Wishes” for the next twenty years.

The role of Disney’s Tinker Bell holds some mystery, as it should. Tinker Bell talks with Guests in Pixie Hollow, near the front of Magic Kingdom deep within the Main Street Theater. But she will also be seen in parades and during the nighttime fireworks near the castle. How Tinker Bell is cast has some surrounding mythology, too!

This is one role where weight needs to be considered. The Cast Member needs to be light enough for the harness and cables to hold, but heavy enough to have the momentum to sail down to Tomorrowland. It’s rumored that the feisty fairy at Walt Disney World needs to be between 95 and 115 pounds in order to fly properly (and safely)! Anyone, regardless of gender, can be the Tinker Bell character, if they are fit and strong enough!

While she’s climbing up Cinderella Castle for her big moment, there’s a lot to consider about the trip down to Neverland at 30 miles per hour. We hear that the tip of the castle where she takes off is only big enough for Tink and her Cast Member. There, at 189 feet above the pavement, she’s assisted to the line and then will take her 30-second trip to the top of Tomorrowland Terrace. On the other side, more Cast Members are ready to assist the landing, with mats, a tether, or possibly other types of assistance.

We also learned that Tinker Bell’s outfit can weigh a LOT. Not just her leaf dress and puffball shoes, Tinker Bell also wears a safety harness and in modern times, light packs, a lit “hair helmet,” light-up wand, and wings! Pop Sugar tips us off that the entire getup can weigh 70 pounds, unconfirmed.

In fact, there’s such a lag going down the line, Tinkerbell will sometimes have to finish her journey by reaching one hand over the other until she reaches her landing spot. Here’s a video of Tinker Bell flying during the “Happily Ever After” Fireworks Spectacular. Just after the one-minute mark, you can barely see the terrace gate open and at the 1:30 mark, Tinker Bell’s lights snap-on, and she sails down.

History of Tinker Bell in the Parks

Tinker Bell also needs to be pretty short! It’s rumored that she needs to be approximately between 4’11” and 5’2″ tall (quite pixie-sized!) The aptly named Tiny Kline was the very first Tinker Bell at Disneyland Park, flying high over Sleeping Beauty Castle in 1961. This adventure daredevil was originally only 4’10”, 98 pounds, and nearly 70 years old!

Walt Disney recruited Kline to perform an aerial act at the Hollywood Bowl dressed as Tinker Bell. Strapped into a harness, Kline was part of the ‘Disneyland sponsors Disney Night at the Hollywood Bowl’ in 1958. Three short years later, when Tinker Bell was incorporated into the wonderful world of Disneyland, Walt again turned to Kline. A Hungarian-born Ringling Bros. and Barnum & Bailey Circus acrobat, Kline continued to fly for four years before she was replaced (due to Kline’s illness with cancer) by a nimble 19-year-old French woman.

Later on, actress Gina Rock would become the longest flying Tinkerbell at Disneyland. For 21 years, she traveled from the top of the Matterhorn downwards during the nighttime fireworks at the Happiest Place on Earth.

This rarely seen photo was taken in 1989 in Disneyland Park. What is interesting is that this particular costume is mostly yellow, and uses disco mirrors sewn into the costume to pick up spotlights that would cause her to glitter in the night sky. Note the wants is wired to light up and is attached to her backpack belt harness.

Tinker bell at the top of the Matterhorn. Disneyland – 1989.

But what about Magic Kingdom at Walt Disney World? When visitors to Magic Kingdom questioned Tink’s absence from “Fantasy in the Sky”, they noted she had already been flying in Disneyland for years during the same show.

Listening to Guests’ concerns, Tinker Bell’s first Florida flight was cast during a special 4th of July version of fireworks for the first time in 1985, drawing in more than 60,000 guests for her inaugural flight. Later on, in a reimagining of the show “Fantasy in the Sky,” Imagineers incorporated our favorite pixie to fly nightly, and nearly every evening since Guests are wowed by her flight.

Do you love to see Tinker Bell fly over the castle? Leave us a comment below!