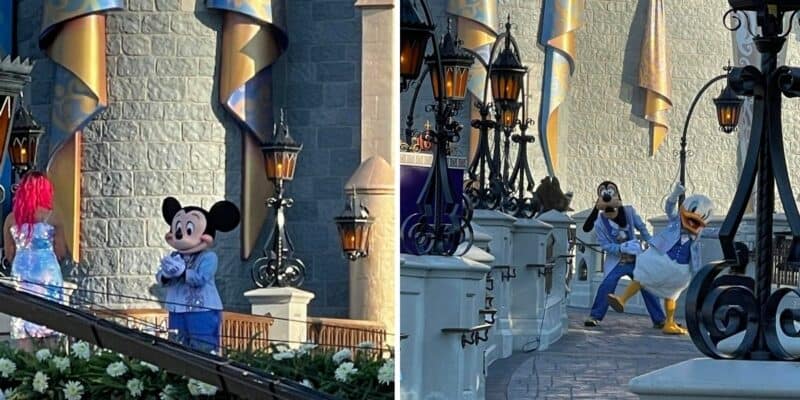 Walt Disney World is gearing up to celebrate the Most Magical Celebration on Earth; with the celebration will come a plethora of offerings. One of the most anticipated offerings is the new firework show, Disney Enchantment.

Considering Guests have formed such a strong attachment to Happily Ever After, many have been nervous to see what the new show will bring. Today, it seems that Disney was filming a promo for the new show’s feature song, “You Are the Magic.” We have already heard bits of the instrumental that the song entails. However, today Philip Lawrence and Kayla Alvarez were joined by Mickey Mouse, Minnie Mouse, and the rest of the gang decked out in their 50th gear.

Christian Forrest was at Magic Kingdom this morning as a Guest when he noticed that the filming had begun and took to social media to share it around 8:00 a.m. this morning! Below, you can see a full video that he captured of the song! This is the longest clip that we have heard of the song at this time, which is exciting as it gives Guests a window as to what they can expect during the new show on October 1.

We will likely get to see the entire edited video shortly, which will give Guests even more anticipation to see the show. Much like Happily Ever After, we will likely hear a more grand orchestrated version during the firework show of the song, considering we have already seen and listened to the orchestra play the instrumental.

It seems the characters even had some choreographed dance moves!

The song already has us feeling emotional, and we cannot wait to hear it in full force as Disney Enchantment debuts on October 1.

What do you think of the new song, “You Are the Magic”? Let us know in the comments below.