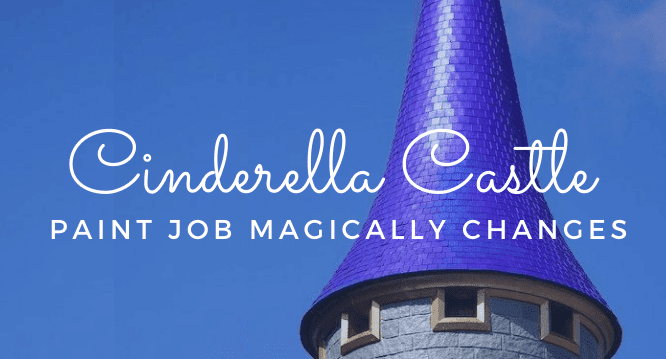 Remember that prom dress you had in 1997 that changed depending on which way you turned? Purple to blue to green and back again? It seems that the new Cinderella Castle paint job in Magic Kingdom is akin to this. It’s more than meets the eye!

The new paint job shows blue and then suddenly glimmers in purple 8 seconds later, showcasing the true nature of the Cinderella Castle paint job. His Disney Park related tweet is below.

Showcasing each photo individually, Disney fans can see the royal makeover in honor of the upcoming 50th anniversary is nearly finished with not only speckled bricks for added dimension, but the rooftop color is more than just a brilliant blue. There is a touch of iridescence that comes alive when sunlight permeates the clouds and shines down onto it.

The first photo (seen below) shows what we understand to be Disney Parks Blog’s “base” concept art colors for the Magic Kingdom park icon.

A mere eight seconds later, the same camera settings show a brilliant purple sheen on the castle turrets, with the iconic castle makeover turning magical. The purple that suddenly appears matches the banners perfectly, making us understand why they were added when the blue and pink didn’t quite answer that call.

@Bioreconstruct goes on to give us a close up of the castle turrets complete with magical makeover renovation, and we can easily see the base blue shining with iridescent purple on top.

If you as a Disney fan were privvy to the goings on at the 2019 D23 convention, you may know about the color choice announcements fo the 50th anniversary. While we are seeing a gold trim tribute to a classic “50th wedding anniversary,” what we also note is Disney’s mood board celebrating iridescent rainbow.

@braindud92 on Twitter brings up this iridescent concept art and shows us the cupcakes, castle colors, MagicBands, banners, latte toppers, and even fireworks that are reminiscent of this turret paint job. We’re excited to see if this color palette (which is more of a visual texture element) continues to grow as the October 1 anniversary draws closer in 2021.

I keep hearing questions of the color choice for Cinderella’s castle…to me it’s obviously an attempt at iridescent, remember the D23 announcement for WDW 50th? Get ready for iridescent up the wazoo! ? pic.twitter.com/FiR28CEBJw

It’s true that not all Disney fans have been loving the new Cinderella Castle Paint Job. Many fans (myself included) felt that the Magic Kingdom royal makeover favored the look of Disneyland’s Castle, Sleeping Beauty Castle, too much. These fans of the original Cinderella Castle color scheme wanted the pink to go.

Some other vocal fans were shocked and pleased by the timely anniversary paint job, giving props to Disney for not bringing back the Birthday Cake Castle, and instead, creating a new classic look that will stay more brilliant in the Florida sun.

Book a trip with Academy Travel to see it for yourself!

Are you a fan of the new Cinderella Castle paint job? Leave us a comment with your thoughts on the new iridescent finishing touches!