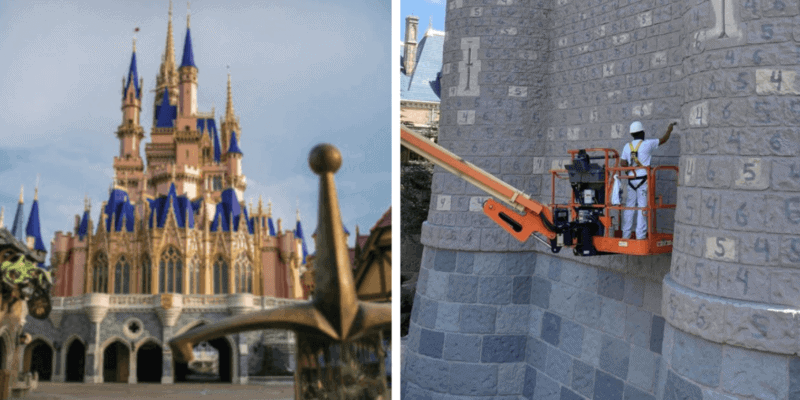 As a child, who didn’t love paint-by-number? This fun activity allows kids to create masterpieces by following a chart in which each letter corresponds to a different color. Even adults love paint-by-number and color-by-number projects; they’ve actually become big sellers for people who want to de-stress!

Thanks to Orlando’s NBC affiliate WESH 2 News, Walt Disney World fans can now see what just might qualify as the world’s largest paint-by-number project. During Cinderella Castle’s recent royal makeover, each brick on the iconic Disney castle was numbered to allow the painting crew to (relatively) easily paint the structure.

How do you paint a Disney castle? Paint by numbers!

We’re sure this wasn’t as relaxing as sitting on the couch with a cup of coffee and a color-by-number coloring book! Imagine if the Disney Park construction crew had mixed-up two colors. Yikes!

This photo of the Cinderella Castle renovation was clearly taken before the Magic Kingdom AP Preview, which started yesterday, July 9, ahead of tomorrow’s Walt Disney World Resort phased reopening.

No matter what you think about the new color scheme on the WDW castle, nobody can deny it is eye-catching! Featuring a rose gold main color with royal blue turrets and gold accents, Cinderella Castle at Magic Kingdom park is more regal than ever in this writer’s opinion.

Truly fit for a Princess!

What do you think about this look at how Cinderella Castle was painted? We think it’s fascinating to see the Disney World castle paint by number grid!

If you want to visit a Disney theme park in the near future, contact our friends at Academy Travel for assistance in planning your trip. Whether you want to be at Disney World for the 50th Anniversary in 2021 or you would prefer to see Sleeping Beauty Castle at Disneyland when the park reopens, the skilled team at Academy Travel can help you. Click here to book your vacation!