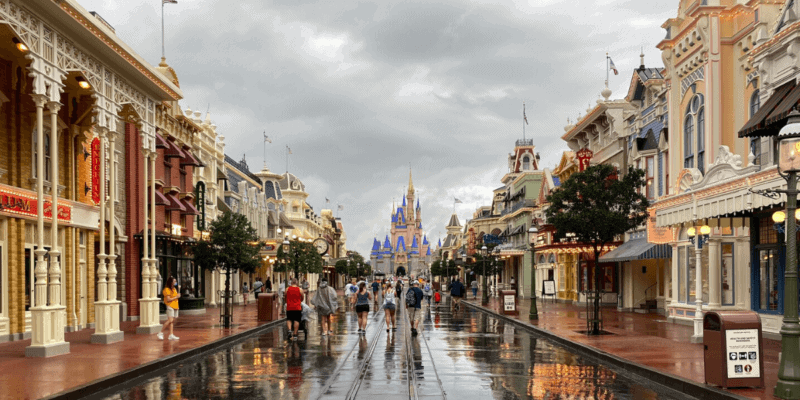 It is day two of Annual Passholder Previews at Walt Disney World, and rain has descended upon the Magic Kingdom. While some may look at this as a downer, we at Inside the Magic wanted to take this opportunity to showcase how beautiful this park looks in the rain.

We are here in line at the Parking Plaza on a rainy morning for the Magic Kingdom passholder preview. #DisneyWorld #MagicKingdom pic.twitter.com/TZUzoKNQn4

First up the temperature and security screening. It was quick and easy. #DisneyWorld #MagicKingdom pic.twitter.com/9zU8DzznJp

Taking the Monorail. They ask you how many in your party and assign you a number and then you enter the car and you sit on the seats. There is a divider splitting the cabins so everyone is properly distanced. #DisneyWorld #MagicKingdom pic.twitter.com/yn1AkZCzjr

While dark clouds hover overhead, Annual Passholders–deprived of the magic for so long–still arrive for their first day back inside the Magic Kingdom. Main Street’s lamp lights reflect off the pavement, creating a shining shimmering splendid effect despite the dreary sky.

Because of the rain, we can see far fewer Cast Members greeting Guests along Main Street and there are no Characters out and about. The My Disney Experience app showed that only the Tomorrowland Speedway was temporarily closed. It is now up and running. Other outside rides such as Dumbo the Flying Elephant, Magic Carpets of Aladdin, Splash Mountain, and Jungle Cruise are still open at this time.

We at Inside the Magic were at the Magic Kingdom for the first Annual Passholder preview on July 9, and we were fortunate enough to have a hot sunny day in the park. Click the link below to read more about what we experienced.

Are these pictures make you yearn for a return to the Magic Kingdom? Our friends at Academy Travel are standing by to provide the expert guidance you need to not only create the best vacation for your budget but to also stay informed on all new procedures and news so you can be prepared and make this trip as magical as possible. Click here to learn more and receive your free, no-obligation quote today.

Comments Off on Beautiful! Rain at Magic Kingdom on AP Preview Day