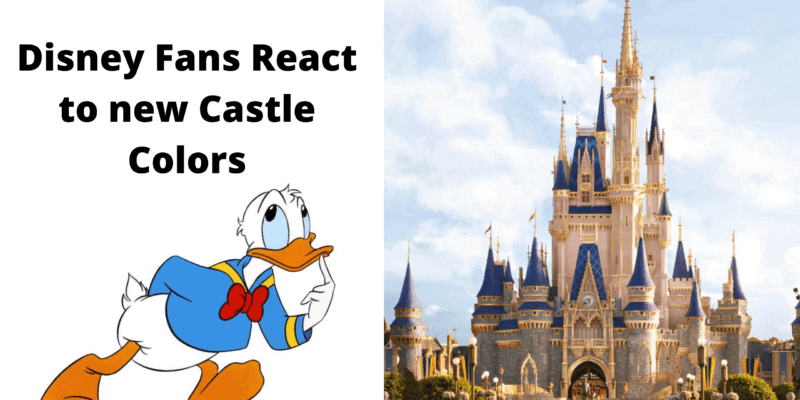 During the park closures at Walt Disney World, the team at the Magic Kingdom have been hard at work in bringing the new vision for Cinderella Castle to life in time for the 50th anniversary next year.

Though the concept art (pictured below) showcased a new era for the park with the Cinderella Castle makeover, many fans have taken to Twitter to convey that the new style has taken things a bit too far. We’ve also included a few opinions from fellow writers here at ITM!

And here’s a recent aerial view:

Aerial view of Cinderella Castle today. It's been trimmed in gold for the 50th anniversary. Roofs at the hub are being painted matching richer blue. pic.twitter.com/0GyCUG1FQI

Firstly, let’s look at a few people who aren’t the biggest fans of the new color scheme:

What the hell have they done to Cinderella Castle?! ???

This is the EXACT same color scheme of Disneyland’s Sleeping Beauty Castle.

This is NOT Cinderella’s Castle anymore… ☹️ https://t.co/mIX0G47HKs

While the initial feedback seems pretty negative, there are a few people that genuinely seem to like the new change:

I think the new paint job on Cinderella castle looks pretty, don’t worry y’all , the sun will fade it ✨

the cinderella castle’s makeover at disney world is PRETTY y’all are just mean ?

Now, let’s hear from some of the team here at ITM:

I just think the new paint colors completely wiped the uniqueness from Cinderella Castle. It now resembles most of the other castles and that almost makes it feel overly corporate and no longer nostalgic. It honestly makes me so sad seeing pictures of it. We definitely need to “keep moving forward” in the parks, as per Walts vision. But if we erase and paint over all of the original things, the parks will lose their appeal to a percentage of the audience who love it for nostalgic reasons.

My main issue with the castle is that the colors look WAY more vibrant than the concept art! the concept art showed the super soft pink with the gold, but looking at photos it looks a lot brighter.

But also, I’m a Disneyland girl, and as amazing as I know MK’s castle is in person, I am partial to the DLP and DLR castles, so the pink doesn’t bug me. I just think the concept art should have reflected that more!

These can be presented without comment and as always, Lindsey’s reactions are fantastic:

As for my opinion, I am indifferent on the changes. It is a bit of a shame to see the castle lose a bit of personality, but I am also of the opinion that you can see a castle at each of Disney’s resorts. I consider Spaceship Earth to be the shining park icon of Walt Disney World!

If you want to hear more ITM opinions then go and check out what our favorite Disney Park attractions are!

At this stage, we are just looking forward to getting back into a theme park at Disney again and can’t wait to see the castle at Disney’s Magic Kingdom in person to analyze the magical makeover in more detail.

What do you think of the changes to Cinderella Castle? Let us know in the comments below!