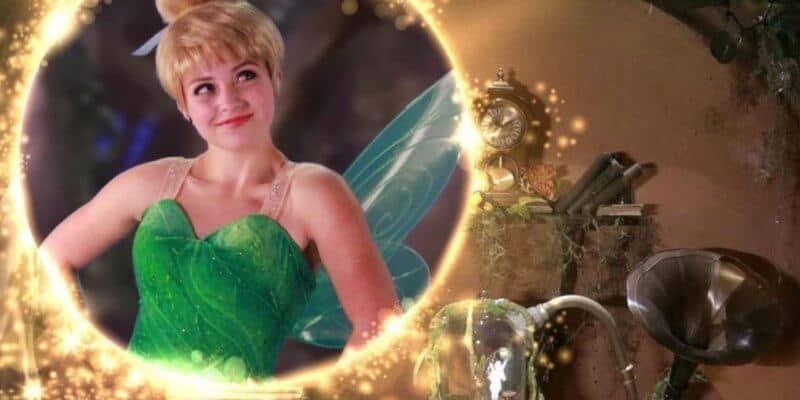 Disneyland Resort is gearing up to reopen both of the theme parks for the first time in over one year — and with the reopening Guests may get to experience a new interaction featuring the iconic fairy, Tinker Bell!

On April 30, Guests will be welcomed back into Disneyland Park and Disney California Adventure as they are able to once again experience the Disney magic. With the reopening of the parks, however, come some new safety and health protocols in order to keep both Guests and Cast Members safe as the theme parks operate during the ongoing pandemic.

Some changes include the installation of social distancing markers around the theme parks, the requirement of a proper face covering, and modified experiences including the temporary suspension of fireworks and modifications of how Guests will see Disney characters.

Now, it looks like before Disneyland officially reopens its theme parks to the public, Disney Imagineering is testing a new way for Guests to interact with the one and only Tinker Bell.

While at A Touch of Disney — a recent event at Disney California Adventure — writer, culinary historian, and storyteller Jenn T. (@jenn.tanaka) shared that she and her family were surprised with an incredible experience that Disney Imagineering is currently testing. She writes:

A journey for popcorn led us to a friendly cast member. He kindly invited us to visit Tinker Bell’s workshop! ?

During #atouchofdisney , our family was asked to participate in an #imagineering playtest where the kids learned all about Pixie Hollow The children were star struck at first, but then the magic took over and they were chatting with #tinkerbell as if she were dear friend. It was truly a special visit!

Currently, the #castmembers are testing out this attraction. I hope they keep this #character experience when the parks reopen! For @dharsadi , it was the highlight of our day

Additionally, Inside the Magic Twitter follower Moni (@hellom0ni) shared with us that she and her daughter also had the opportunity to experience the new Tinker Bell interaction!

My daughter & I went to this. I thought it was sweet. A highlight of our Touch of Disney visit.

My daughter & I went to this. I thought it was sweet. A highlight of our Touch of Disney visit.

From the looks of the video shared by Jenn on Instagram, it seems that this interaction is virtual and Guests are not interacting with a Disney character face to face. This seems very similar to the Disney California Adventure attraction — Turtle Talk with Crush — which has been confirmed to reopen with the theme parks at the end of the month.

With this being said, Disneyland could potentially roll this out sooner rather than later as it seems this interaction is pandemic friendly, however, it is important to keep in mind that it is in the testing stages and there is no confirmation on when it will debut to the public.

Again, the new experience is currently being tested and Jenn, as well as Moni, were both very lucky Guests who were able to check it out. There is no word on where this Tinker Bell interaction will be located, no confirmation on when it will open (including if it will reopen with the theme parks or not), or even if it will become a permanent experience.

Before the pandemic, Guests were able to visit Tinker Bell at Pixie Hollow at Disneyland Park and inside Tinker Bell’s Magical Nook at Magic Kingdom Park at Disney World. However, because of the pandemic, character meet and greets are suspended and both of these locations remain closed. Additionally, Pixie Hollow at Disneyland Park will not reopen with the theme park on April 30.

If you are looking to visit Tinker Bell at a Disney Park in the near future, head on over to Walt Disney World in Florida where Tinker Bell can currently be seen on her treasure chest float during her very own cavalcade at Magic Kingdom!

It is important to keep in mind that at this time Disneyland Park and Disney California Adventure will only allow California residents into the theme parks to stay in line with the state’s travel guidelines.

Additionally, when the parks reopen, some amenities — including FASTPASS, Disney MaxPass, Magic Mornings, and Extra Magic Hour offerings — will be suspended as part of the phased reopening efforts amid the pandemic.

The official Disneyland website also explains that select attractions and certain experiences that draw crowds, including parades and nighttime spectaculars, will return at a later date. This isn’t too much of a surprise since this is similar to how Disney World is currently operating amid the pandemic.

Would you like to see this Tinker Bell interaction become a new experience at Disneyland? Let us know in the comments below.