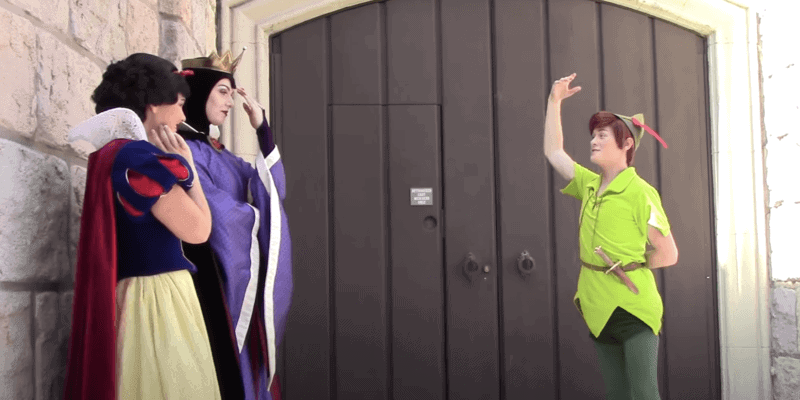 One of the best things about visiting a Disney Park is being able to meet and interact with some of your favorite Disney characters!

Another exciting thing that Guests get to witness is how characters get to interact with each other. Think about it — where else can you see all of the Disney Princesses talk to each other (aside from Wreck-it Ralph 2: Ralph Breaks the Internet), even though they are all from separate worlds? It allows Guests to enter the amalgamated world of Disney fantasy, which is always a truly unique experience.

Well, sometimes character interactions can be pretty hilarious! Peter Pan is a face character who tends to joke around with anyone who comes around him. He is forever a kid, so the behavior makes sense, but watching Peter Pan chat with a Disney villain or Princess will always be fun to see.

Below we can see a hilarious video of Pan making fun of a few evil Disney ladies at Disneyland thanks to YouTuber Dwats. In the video, Pan first greets Princess Snow White with a regal entrance and then heads to Maleficent with a bow, and instead of saying “your royal highness”, he says “your double chin-ness” and runs away with a child-like shriek.

He then heads to the Queen of Hearts from Alice in Wonderland and gives her the same greeting, followed by the same running exit! It’s all quite hilarious.

YouTube user Dwats also posted another video of Peter Pan trolling Gaston from Beauty and the Beast at Disneyland Resort. Captain Hook was also there, but the video is full of Pan mocking Gaston and calling him a “big chicken”. If you want to watch the hilarity play out, take a look at the video below.

In another video, we can also see Pan giving Captain Hook a tough time, making all of the Guests hide from the pirate!

It seems that Pan has also done the classic childlike antic of eating grass just to see if it tastes good! This time, he was joined by Alice from Alice in Wonderland. The two skip backward and Alice even calls out Pan for eating off the ground.

From these videos, it is pretty clear that whenever Guests see the infamous Disney character Peter Pan in the parks, look out because he is probably up to something!

What Disney characters do you like interacting with when you are at the parks?

Want to plan a Disneyland, Disney California Adventure or visit the Walt Disney World Resort on vacation? How about Disneyland Paris? Click here to get started! With character dining, character cavalcades, and more, there is so much to explore and Disney fans can meet their favorite character.

Comments Off on Peter Pan Trolls Other Characters at Disneyland