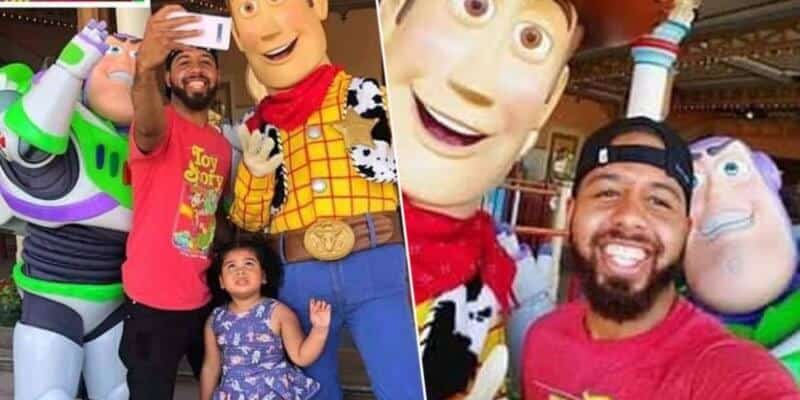 Disneyland is the Happiest Place on Earth no matter how old or young you are…and in the case of one dad, he was much happier to meet some Disneyland characters than his daughter was. A family of three recently visited Disneyland Resort for a happy getaway, and when it came time to take pictures with some iconic “Toy Story” characters, the dad in the family was much more excited than the daughter.

LaRoyce Hall, his girlfriend Carynn, and their three-year-old daughter Zayda recently took a fun-filled family vacation and journeyed to the Disneyland Resort all the way from San Antonio, Texas. So as you can imagine if you’re traveling cross-country to the Happiest Place on Earth, you probably hope that every member of the family is equally excited to make the trip. During one of their Disney days, the young family came across a “Toy Story” meet-an-greet on Pixar Pier…and from what we can tell, the pictures of the character encounter only tell half of the story. At first glance, this is a fun photo of a Disney fan with his favorite characters, but as you look further, you can see that Hall ended up cropping out his daughter, who doesn’t exactly look the happiest in this moment. 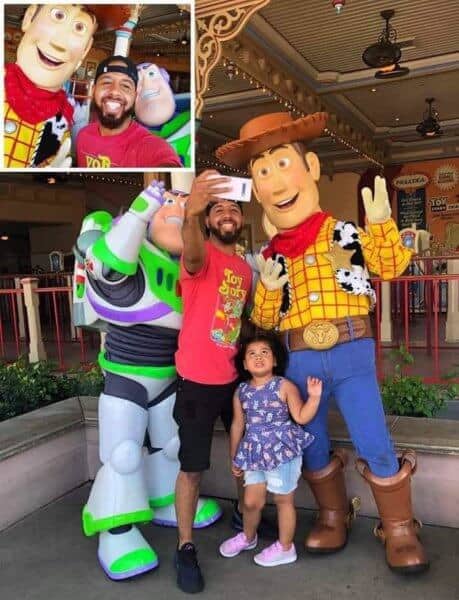 “We were taking pictures with all the characters around the park but toy story is my favorite movie! So when we got in line to see Bo Peep I initially had a shirt on that said ‘Best Dad Ever’ well I took that one off in line and put on my Toy Story shirt,” said Hall to Unilad. “Originally it was only suppose to be Woody coming out but then Buzz came out too, so I was like a kid on Christmas.”

In the first photo, it looks like Hall is much more excited to be in a picture with Woody and Buzz than his young daughter. But who wouldn’t make a frustrated face if they weren’t tall enough to fit a Disney character selfie?

“We did let my daughter take her pictures first. Then I quickly ran to them for a selfie. I didn’t realize my daughter was by my leg trying to get in the picture,” Hall said.

Don’t worry. It looks like little Zayda got her magical moment after all, meeting some fan-favorite characters and getting to ride some amazing Disneyland attractions.

“It was just a fun vacation my daughter now that she talks always says I want to go to the ‘Disney Channel’ aka Disneyland. So, as a parent you do anything to put a smile on her face,” Hall shared.

Have you and your family ever had a memorable, heartfelt, or hilarious encounter with characters at a Disney park? Share your vacation memories with us!