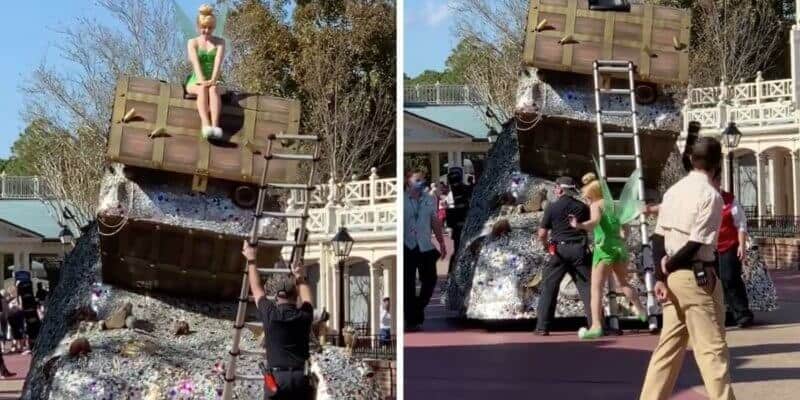 Magic Kingdom has been running various cavalcades ever since the park reopened in July. Some cavalcades include Mickey, Minnie, and Pluto, while others feature Goofy, Max, and Clarabelle. And, one particular float features the one and only Tinker Bell from Peter Pan!

Well, unfortunately, this afternoon at Magic Kingdom, Tink’s float, which is a giant treasure chest, experienced some technical difficulties and she had to evacuate mid-route. In this first video sent to Inside the Magic, you can see Tinker Bell waiting for the ladder to be set up so she can safely disembark from her float.

In this second video, also sent to Inside the Magic, you can see Tink as she cautiously and safely steps down the ladder to the street with the assistance of Cast Members.

After Tink was safely on the ground, she made the best of the situation. Though her float broke down, that didn’t stop her from continuing to strut down the street, waving and smiling to Guests!

We are so glad to see that Tinker Bell is okay and made the most out of the situation! You can typically catch this fairy in Magic Kingdom on her pop-up treasure chest themed cavalcade, which appears randomly throughout the day.

This isn’t the first incident that has occurred since the new cavalcades debuted at Magic Kingdom. During reopening day at Magic Kingdom, Merida’s horse, who Merida rides during the Disney Princess cavalcade which happens periodically throughout the day, got spooked by a balloon and had to be escorted off of Main Street USA. You can read more about this incident here.

Additionally, back in September Goofy’s cavalcade came to an unexpected stop at the bridge by Sleepy Hollow in-between Liberty Square and Main Street U.S.A., which is when Goofy lost his balance. After a few seconds, Guests could see Goofy wave goodbye as he was lowered into the float. You can read more about this incident here.

Please keep in mind if you plan on visiting Walt Disney World Resort, there have been a lot of protocols put into place to keep Guests and Cast Members safe. These include social distancing measures, excessive cleanliness, encouragement of mobile orders, plexiglass, the elimination of character meet and greets, parades and fireworks, and more.

Do you have an upcoming Disney World vacation? Let us know in the comments below.