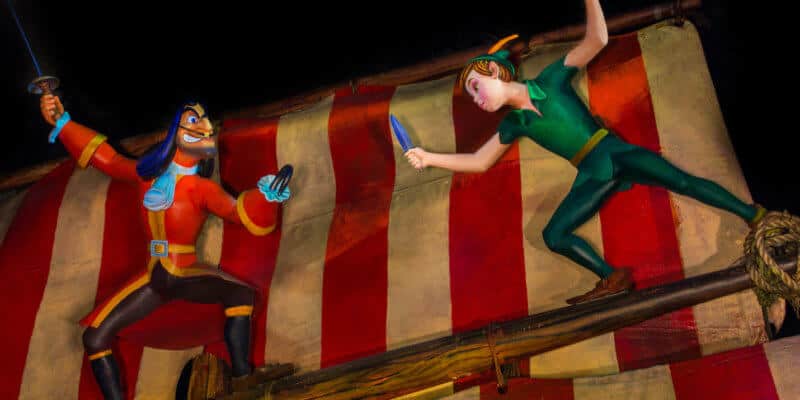 It wasn’t long ago we reported that Peter Pan’s Flight was quickly becoming a “hot topic” regarding Disney Park attraction rethemes.

Thanks to a Tweet from DLP Report, it was pointed out that Disneyland Paris recently digitally removed one scene of the ride, which features Tiger Lily and the Indian Village, from their “Ride and Learn: Peter Pan” video. It is important to note that DLP Report states that the attraction will not see any changes when the Resort reopens.

After this video emerged, fans voiced their opinions about the classic Disney Parks attraction.

Twitter user, Francisco M., replied to our first article on the topic, saying, “This is ridiculous…..STOP TAKING THE CLASSICS!!!!!”

This is ridiculous…..STOP TAKING THE CLASSICS!!!!!

While Twitter user, Pete, replied with two simple words to that same article — “Please, no.”

Peter Pan is a Disney Classic – Leave it alone people! If you don’t like don’t watch the film or wait in a long line to go on the ride!

Another reader, Nicholas A., shared his thoughts with us on Facebook:

It makes no sense, however if you want to replace it eitherly with a new attraction all to gether that would sad, but right in line with walts vision. Never try to erase your past. On human or company should pretend to be perfect. Perfect doesn’t exist.

And, Inside the Magic fan, Kevin expressed his feelings about the situation, writing:

I don’t know why people get so upset about changes being made to rides because we’ve grown as a society to realize that certain stereotypes, even those that we’ve used in the past, are wrong.

That being said, I don’t get why the Indians should be removed from the ride. Sure, the song and some of their actions in the movie are something that most likely wouldn’t be done today. But in the ride, they are just sitting around. They aren’t doing anything offensive. The only possibly offensive thing about them is that they seem a bit like caricatures. But, really, couldn’t you say that for all of the humans in Disney cartoons?

However, ITM reader Doug feels Tiger Lily’s scene isn’t that big of a deal in Disneyland’s version of Peter Pan’s Flight, so if this were to happen, he “wouldn’t lose any sleep over it.”

Tiger Lilly isn’t an important part of the ride’s story, at least in Anaheim, so if Disney wants to take her out of the ride I won’t lose any sleep over it. Past that hypothetical situation, anyone hyper concerned about portrayals of Native Americans are likely to be Disappointed by Disney. While cutting out the most questionable “Indian” parts of the film wouldn’t hurt it structurally, Disney isn’t going to do that or bury it in a vault like Song of the South. At most they will keep it off of broadcast and cable and won’t issue new home video releases; but they will keep it available on Disney+ with a disclaimer and accessable to adults only.

Why is Peter Pan in Question?

In case you weren’t aware, Peter Pan (1953) has been accused of being “outdated” and “depicting the mistreatment of people and cultures” in certain scenes, which also appear in the Disney Parks attraction Peter Pan’s Flight.

Due to these scenes in question, Peter Pan is one of the various films that has recently been removed from children’s profiles on Disney+ for “breaching content advisories.” As for adult profiles, Peter Pan remains available, but it does display a content warning before the movie plays.

Peter Pan’s Flight: You Can Fly!

Sail high into the moonlit sky with Peter Pan’s Flight. Board a colourful galleon and, with the help of some pixie dust and happy thoughts, embark on a high-flying adventure, passing many of the unforgettable settings and scenes made famous in Disney’s animated film, Peter Pan.

Journey to the Darling children’s nursery and behold the first meeting of Wendy, Michael, John and Peter Pan. Soar through the nighttime sky over London, where famous sites like Big Ben and Tower Bridge mingle with a confection of glittering lights. Then, descend into Never Land, home to volcanic peaks and sparkling waterfalls.

Once there, glimpse the Lost Boys and Mermaid Lagoon and sail past Skull Rock. Swoop into Pirate’s Cove, home to an enormous pirate ship, and behold Peter Pan in a swashbuckling duel with Captain Hook. Finally, make your way back to London, leaving a defeated Captain Hook far behind.

At this time, Disney has not stated that Peter Pan’s Flight will get reimagined at any of the current Disney Parks, including Walt Disney World, Disneyland Park, Disneyland Paris, Tokyo Disneyland, or Shanghai Disneyland.

How do you feel about Peter Pan or Peter Pan’s Flight? Let us know in the comments below.