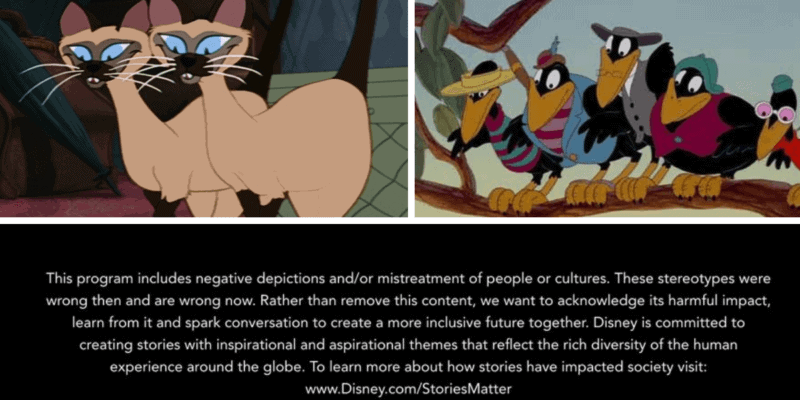 Back when Disney+ first launched, we noticed that the streaming service took precaution as they placed a warning for subscribers to read regarding some of the controversial scenes before watching some of Disney’s older, classic content.

For reference, the scenes that were in question were those from Disney Animated Classics such as Disney’s Dumbo and Lady and the Tramp. In Disney’s Dumbo, during the scene where the black crows sing “When I see an Elephant Fly,” fans and audiences have agreed that it could be depicted and viewed as a negative representation of African Americans. The same goes for a scene from Disney’s Lady and the Tramp. The Siamese Cats sing the song “The Siamese Cat Song,” which many agree is very catchy, but as you listen closer to the lyrics, it makes sense as to why there has been controversy.

Not too long after the conversation started among fans regarding these scenes, Disney+ subscribers noticed that some of the Disney Classics such as Dumbo, The Aristocats, The Jungle Book, and the original Lady and the Tramp all contained a warning, which is placed at the end of the film’s descriptions. These warnings take place to caution Disney fans, who may agree with the “outdated cultural depictions,” that what they are about to watch contains racial portrayals that could be triggering.

These initial warnings were only included at the end of the film’s descriptions, prior to clicking “watch now”. However, now we are noticing that the advisories display after you start the movie and prior to the films beginning. The movies that you may notice this new warning on include Dumbo, The Aristocats, The Jungle Book, the original Lady and the Tramp, Peter Pan, and Swiss Family Robinson.

There are several other films on Disney+ that will display the content advisory, but here are four examples provided by Disney "along with an explanation of some of the negative depictions in each title." pic.twitter.com/fhoxtyLyL4

This advisory is much more in-depth than the original warning that just showed at the end of the film’s description due to certain scenes that were involved in the movie. The original warning read “This program is presented as originally created. It may contain outdated cultural depictions.”

What do you think of the new warning? Let us know your thoughts in the comments below.