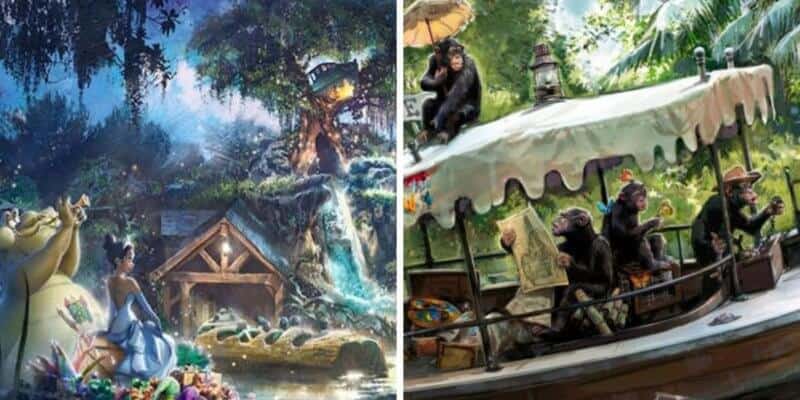 Disney Parks are continuing to move forward and adjust certain attractions to the current times. For example, back in June 2020, Disney Parks officials announced they would be retheming Splash Mountain (at both Disneyland Park at Disneyland Resort and Magic Kingdom at Walt Disney World Resort) with a brand-new story based on the 2009 animated film The Princess and The Frog.

With both Splash Mountain and Jungle Cruise getting rethemes and refurbishments in an effort to move forward and incorporate diversity and inclusion at the theme parks, what other Disney Parks attractions (if any) should be reimagined? Well, our Inside the Magic audience has voiced their opinions, and it seems as though they are pretty evenly split down the middle when it comes to this topic of discussion.

With so many Disney Parks attractions being built a long time ago, many fans feel as though a handful of them are “outdated” and Disney should continue to reimagine these rides so they are more up-to-date with the “current times”.

For example, Inside the Magic reader, Ariana L. said:

While I like Disney the way it is, I agree it’s time for Disney to make some changes. A lot of these rides and settings are outdated. They need it to attract younger crowds, something the newer generation can relate to.

While another ITM reader, Nathanial R., shared exactly which theme park rides he would like to see reimagined:

Nicola R. shared that she feels it is good to continue moving forward and adjusting to the times, writing:

It’s good to move with the times, things can be modernised [sic: modernized] every now and then.

And Inside the Magic follower, Kylie S., quoted the one and only Walt Disney when she shared her thoughts, writing:

Disney is never supposed to be done. It is always supposed to change and grow. Even in Walt’s time things were cycled in and out. My favorite ride is Matterhorn partially because it showed Walt that his parks weren’t perfect in his initial vision and there were a place for bigger coaster rides at his happiest place at earth.

The reimagine of Tower of Terror in Disneyland was so worth it in my opinion. It was the worst Tower and now I love how different it is. It may look like a reskining but it feels like it was made to be that ride. I don’t know if all of them will be this good but I hope Disney never stands stagnan.

Additionally, ITM reader Malcom T. shared his thoughts on the classic Disney Parks attraction, “it’s a small world” and how he feels a portion of this ride needs some reimagining:

I think that the African portion of its a small world should be next in the lineup. While it’s not outwardly offensive or racially insensitive, I do think that this area could be modernized to show the African people as something besides tribal people living in the jungle. Maybe including some of the ancient wonders of places like Ethiopia, Morocco, or the Zulu Empire. Showing more of the diversity found across the African continent could make the ride feel a bit more whole and modern.

However, on the flip side, many Disney fans are asking Disney to “stop” reimagining rides as they hold special memories for so many.

Codi B. feels as though politics is getting in the way and shares her thoughts saying:

Leave the rides alone!! Leave politics out of it.

Educate don’t eliminate! They were created in their images for a reason! Tell the story!!!

And Diego V. shared his thoughts by saying the term “reimagined” can be interpreted a few different ways and feels as though there are rides that will benefit from change, but feels as though Disney also needs to evaluate each reimagining carefully. He writes:

Define “Re-Imagined”… The term is not exactly applicable to EVERY ride that’s showing it’s age. There are rides, like Jungle Cruise and Spaceship Earth, that will be benefit greatly from their respective “reimaginings”. Others, like the turn-Splash-Mountain-into-Princess-and-the-Frog-rethemeing, while one understands the purpose of it, could result in the attraction losing its “thrill” appeal, especially among the teenage crowd. I think Disney should evaluate each reimagining/retheming carefully, especially their lasting impact on each attraction’s popularity. After all, good-intentioned mistakes have been made in the past (I’m looking at you, Iago and Zazu)

All in all, it looks as though Disney fans everywhere aren’t afraid to voice their opinions regarding the Disney Parks rethemes as some of them are all for continuing to reimagine some attractions while others feel as though Disney should stop.

What do you think? Should other Disney Parks be reimagined and rethemed? If so, which ones? Let us know in the comments below.