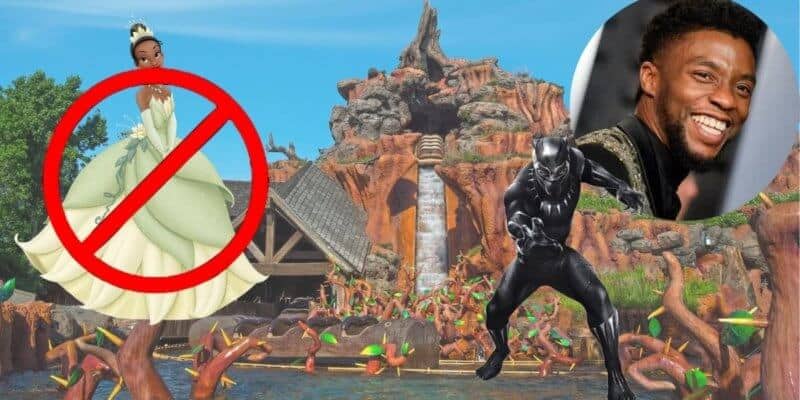 Back in June, Disney announced (after a petition made its rounds on the Internet) that the classic theme park attraction Splash Mountain would be rethemed to the 2009 Disney Princess animated movie The Princess and the Frog.

Now, fans are petitioning for Disney to reconsider the new theming of the Disney park attraction, and instead theme it to Black Panther, in honor of the late Chadwick Boseman, who passed away this year after battling cancer.

The official description of the petition reads:

If you want to learn more about this petition, check it out here.

There is currently a Splash Mountain attraction located in both Disneyland park at Disneyland Resort and in Magic Kingdom at Walt Disney World, and Disney already confirmed both would be rethemed to The Princess and the Frog. However, this new petition got us thinking.

As many of you already know, Disney is bringing Avengers Campus to its theme park, Disney California Adventure, so bringing a Black Panther theme to Splash Mountain in Disneyland wouldn’t be that far fetched. And ever since we learned of Boseman’s passing, fans are now wondering if the E-ticket attraction will be more themed toward Black Panther than originally planned.

On the flip side, over on the other side of the United States, Disney park fans are skeptical if Marvel will ever make its way into Walt Disney World in Florida due to the current contract with Universal.  We know the Guardians of the Galaxy coaster is coming to EPCOT, but could Black Panther also have a presence at the FL Disney Parks?

More on The Princess and the Frog retheme

In case you missed it, Disney’s official announcement for the retheming of Splash Mountain from June reads:

Do you want to see Disney retheme Splash Mountain to Black Panther? Or should Disney stay with the plans for The Princess and the Frog? Let us know your thoughts in the comments below.