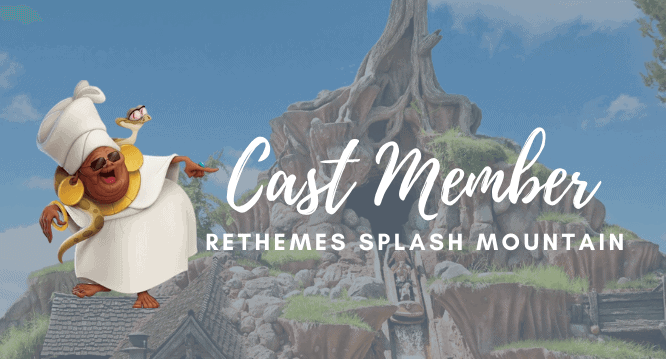 On his personal Facebook, Frederick Chambers shares his own art, story, and production themes for a retake on Splash Mountain. The Frontierland ride that exists both in Disneyland Park and Magic Kingdom have undergone recent scrutiny as petitions have been circulating to eliminate the racist theming that stems from the film, Song of the South. Chambers’ art and story ideas have taken off, miring him in a debate surrounding the bicoastal attraction. Of course, any official changes would have to go through the official creative arm of Walt Disney Imagineering, but that hasn’t stopped Chambers from creating.

Chambers tells the OC Register that he remembers riding Disneyland’s Splash Mountain as a kid with his blind uncle and feeling very uncomfortable.

“He would always call it the racist animal ride,” said Chambers, 22, a Disneyland cast member from Orange. “He could simply hear the fact that these were animal caricatures of people of color. It sounded problematic to him simply coming from an audio perspective. Maybe that’s not what you want in a Disney park.”

Bob Iger, now Chair of Disney’s Board of Directors may end up feeling the same way about the attraction. During an interview regarding the offerings on Disney+, Iger had originally said “every” film would be offered, and then later corrected that the 1980 film, Song of the South would not appear in any form on the streaming service. “I’ve felt as long as I’ve been CEO that ‘Song of the South’ — even with a disclaimer — was just not appropriate in today’s world,” Iger said during a 2019 shareholder meeting. “It’s just hard, given the depictions in some of those films, to bring them out today without in some form or another offending people. So we’ve decided not to do that.”

The current Splash Mountain story takes a Disney Fan through a log flume ride following Brer Rabbit as he escapes the clutches of Brer Bear and Brer Fox through clever trickery. There is no mention of Uncle Remus or Song of the South, the movie from which the story and imagery is pulled. Chambers shared his concept art (as he creates for many attractions out of curiosity) on social media (Twitter and Facebook) proposing a full retheming based on Princess and the Frog. Taking place in the Bayou, the new look fits seamlessly into Disneyland’s Critter Country and the nearby New Orleans Square.

The Princess and the Frog was released in 2009, and “was celebrated as Disney’s first animated depiction of an African American princess. The film was nominated for an Academy Award for best animated feature and received two nods in the best original song category for “Almost There” and “Down in New Orleans.” reflects the OC Register.

Chambers’ art caught much attention since he has shared it, and now the re-theme pitch has been shared by major news outlets all over the country. The artist and Cast Member makes it clear that these ideas are his alone and he does not speak for The Walt Disney Company. He was inspired by the Disney+ series, The Imagineering Story and how Imagineers pitch concepts to execs. He was trying to take his fully rethemed attraction idea and boil it down into something immediately consumable. And it worked. Check out his full thread of images, art, and story chapters below. They cover the queue line to initial scenes, drops, and finale, all involving Tiana’s journey.

Princess and the Frog Splash Mountain retheme for Disneyland thread. Just put on the soundtrack and a splash ridethrough while reading this. pic.twitter.com/8z5wOalyB7

“It’s a win-win scenario,” Chambers said. “You take something that’s been problematic in the past and you’re able to replace it with something that is in the present, positive and forward-focused. It also brings more diversity into the park, which is something that is much needed.”

How Likely Is An Immediate Overhaul?

Disney has, of course, updated attractions before. Pirates of the Caribbean is the most recent update regarding The Redhead, now known as Pirate Redd. Twilight Zone: Tower of Terror was also reskinned (entirely) to Guardians of the Galaxy: Breakout in 2017.

An immediate overhaul of the Splash Mountain story in 2020 is unlikely, as Disneyland and Walt Disney World have been closed since mid-March, and reopening the Parks fully will be a slow boat. The full plate Disney has will take time to finish, and considering the stoppage and starting of construction of projects already in process, like Tron, it’s unlikely they would take on another project so soon. But, if either Disneyland or Walt Disney World is ready to update in the light of current events, Chambers would be ready as an already-Cast-Member to lend a hand. He’s currently studying through Disney’s Aspire College Program with plans to major in art or design in order to become a Disney Imagineer. “I definitely think I have something to bring to the table in the future,” Chambers said. Disney has yet to officially respond to his social media pitch. We think he may be a great addition to the theme park Imagineering team.

What do you think of Chambers’ retheming ideas? Which scene is your favorite reskin? Leave us a comment below!