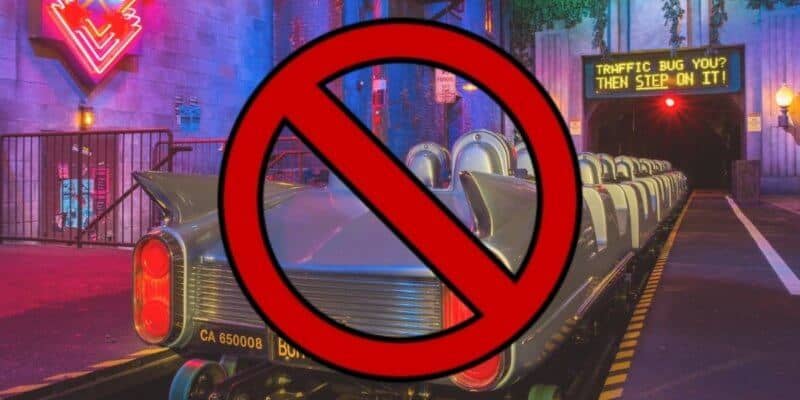 Though this attraction seems to draw crowds day in and day out, I, personally, think it’s time for Disney to replace this coaster. I do love the thrill of Rock ‘n’ Roller Coaster. However, I just don’t see how this theming fits into a park that focuses specifically on movies and films — not music. It just seems “random” and almost outdated at this point.

With Disney constantly wanting to move forward and down new paths — much like they are completely revamping EPCOT and much like they just built an entirely new Star Wars-themed land inside Disney’s Hollywood Studios — I personally feel as though Disney now needs to re-theme Rock ‘n’ Roller Coaster into something that better fits into the park.

So, what could Disney do with the thrill ride? I have a few ideas that I think you may be on board with.

Some have suggested Disney replace Aerosmith as the band within Rock ‘n’ Roller Coaster due to the contract, however, I just don’t agree with the same concept being used. If Disney is going to re-theme the coaster to have a new band, I feel Disney should just re-theme the coaster entirely.

However, if (and that’s a big if) Disney did decide to just replace Aerosmith with a new band, I would like to see someone like Panic! At The Disco — I mean, that cover of Into the Unknown is just absolutely incredible. Other bands that people have speculated take over the attraction include AC/DC, Fall Out Boy, The Beatles, and even One Direction.

A few years ago, Disneyland Paris announced they could be closing their version of Rock ‘n’ Roller Coaster to replace it with an Iron Man-themed coaster.

However, Disney park fans have been skeptical if Marvel will ever make its way into Walt Disney World due to the current contract with Universal.  We do know that EPCOT is getting its Guardians of the Galaxy coaster, but could Rock ‘n’ Roller Coaster follow in its footsteps and also have a Marvel theme take over? Personally, I would love to see this happen, especially since it would fit perfectly into the movie theme at Disney’s Hollywood Studios!

Will Pixar Take Over?

Another theory I have is that Disney could bring Pixar into Disney’s Hollywood Studios, again, following along with the movie theme of the entire park. One possibility is to have a copy-cat version of Disney California Adventure’s Incredicoaster, based off of the Disney Pixar film, The Incredibles.

Or, another possibility is to bring a Monsters, Inc. theme to the coaster — possibly have a Monsters Inc. door coaster, much similar to the scene in the movie. In case you aren’t familiar with which scene I am referring to, it’s the one where Randall chases Mike, Sulley, and Boo through the doors at the factory.

The funny part? This actually almost happened! If you want to read more about this idea, check out our article here.

So what do you think? Should Disney re-theme Rock ‘n’ Roller Coaster or should they keep it as is? Let us know your thoughts in the comments below.