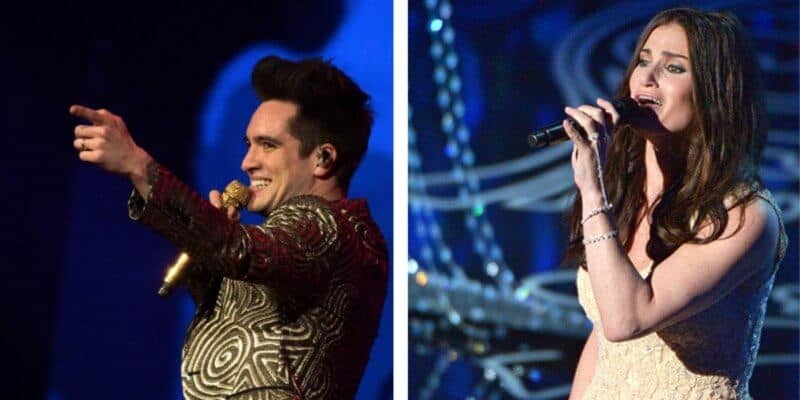 I’m sure by now you have heard Frozen 2′s new song sensation — Into the Unknown.

Into the Unknown is Elsa’s powerful number in the highly animated sequel in which she belts out as she learns to cope with the voice inside of her.

Idina Menzel is known for hitting those high notes, but that doesn’t mean they come easy. In a Good Morning America interview, Menzel shared “I sang them on a good day which means really they were really high notes… it’s going to be so hard on the day when I have a cold, and I have to go sing it somewhere,” she said laughing.

But of course, with a new Disney film comes a superstar cover of the popular songs from the film. Disney fans know that included on the soundtrack is typically a pop version of the lead single from the animated film.

And as you may have already known, Panic! at the Disco is giving Into the Unknown a cover like we have never heard before.

But better yet, Idina Menzel has recently shared what she thinks of Brendon Urie’s version as well as whether or not he sings it any better than her original!

During a PopBuzz interview, Menzel was asked if it’s harder to sing Into The Unknown or Let It Go.

“It’s probably ‘Into the Unknown’ because it’s not in my body and in my voice yet. I haven’t sung it a lot. In the studio is one thing. That was the same with ‘Let It Go’. Once I go on tour and I’m singing it every day, it starts to get in me and I can sing it. It’s probably ‘Into the Unknown’ right now ’cause it’s a little bit of the unknown for me.”

Later on, Menzel was then asked what her thoughts were on Brendon Urie’s (from Panic! at the Disco) version of the song.

“Oh it’s good, he makes it sound easy to sing those high notes. It’s easy on a certain day and then other days it’s not easy but that’s probably what he’d say too. When you’re in the studio, you can try different things and make mistakes and grab the best one. I’m a big fan of his.”

You can watch the full interview in the clip below:

“What do you think of Brendon Urie’s (Into The Unknown) version?”
Idina Menzel – “Oh it’s good, he makes it sound easier to sing those high notes. I am a big fan of his.”

Speaking into existence, idina and brendon will perform into the unknown together one day pic.twitter.com/B9kCllGOwQ

And if you have yet to hear Panic! at the Disco’s cover of Into the Unknown, you can listen to it in the clip below.

Which version of Into the Unknown do you like better? Let us know in the comments.