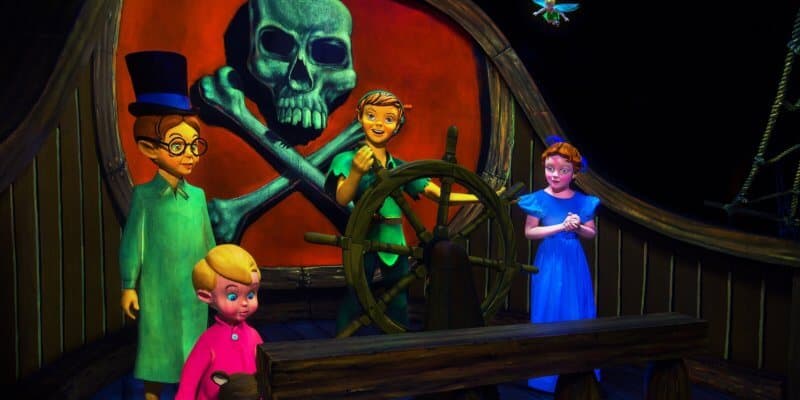 Disney Parks are continuing to move forward and adjust certain attractions to the current times.

For example, in June 2020, Disney Parks officials announced they would be retheming Splash Mountain (at both Disneyland Park at Disneyland Resort and Magic Kingdom at Walt Disney World Resort) with a brand-new story based on the 2009 animated film The Princess and The Frog.

Peter Pan’s Flight: You Can Fly!

Sail high into the moonlit sky with Peter Pan’s Flight. Board a colourful galleon and, with the help of some pixie dust and happy thoughts, embark on a high-flying adventure, passing many of the unforgettable settings and scenes made famous in Disney’s animated film, Peter Pan.

Journey to the Darling children’s nursery and behold the first meeting of Wendy, Michael, John and Peter Pan. Soar through the nighttime sky over London, where famous sites like Big Ben and Tower Bridge mingle with a confection of glittering lights. Then, descend into Never Land, home to volcanic peaks and sparkling waterfalls.

Once there, glimpse the Lost Boys and Mermaid Lagoon and sail past Skull Rock. Swoop into Pirate’s Cove, home to an enormous pirate ship, and behold Peter Pan in a swashbuckling duel with Captain Hook. Finally, make your way back to London, leaving a defeated Captain Hook far behind.

Peter Pan’s Flight to be Reimagined?

In the Tweet below from DLP Report, you can see that Disneyland Paris recently digitally removed one scene, which features Tiger Lily and the Indian Village, in their “Ride and Learn: Peter Pan” video. However, DLP Report points out that the attraction will not see any changes when the Resort reopens.

Disneyland Paris has digitally removed Tiger Lily, and cut the Indian Village in their “Ride and Learn: Peter Pan” video. However, the attraction will not see any actual changes when the Resort reopens.
Video comparison: @teamlooopings https://t.co/xp91I7AFYi pic.twitter.com/BvwesWn0AB

Peter Pan’s Flight is one of the attractions Guests have called to get a bit of reimagining due to certain scenes being “outdated.” Peter Pan is one of the films recently removed from children’s profiles on Disney+ for “breaching content advisories.”

As for adult profiles, Peter Pan remains available, but it does display a content warning before the movie plays.

So, why exactly is Peter Pan being targeted as “outdated” or “depicting/mistreating of people or cultures”? Well, one scene in particular in the film and the attraction at Disney Parks could be offensive to many.

Tiger Lily and her tribe, though the portrayal may not have been considered controversial at the time, is now being looked at as outdated and offensive. USA Today explained this in further detail, reporting:

The original text of “Peter Pan,” as J.M. Barrie wrote it more than a century ago, styles its Indigenous people with a word not used in polite company anymore — not even, someday soon, by Washington’s NFL team, which announced this week that it is “retiring” that name after 87 years.

[…] Isn’t it time for Disney Plus to do something similar with “Peter Pan”? As it stands, the only warning attached to the 1953 animated classic is for tobacco use.

Never mind that the real problem with the scene in question isn’t its so-called peace pipe: it’s the openly racist portrayal of a band of Indigenous people. Disney depicts these tribesmen as comically stereotypical Native Americans, even though — Neverland being a fictional place — they can’t really be American at all.

These whooping, drumming cartoon natives sing “What Made the Red Man Red?” Sample lyrics: “Once the Injun didn’t know / All the things that he know now. / But the Injun he sure learn a lot / And it’s all from asking, ‘How?’”

At this time, Disney has not stated that Peter Pan’s Flight will get reimagined at any of the current Disney Parks, including Walt Disney World, Disneyland Park, Disneyland Paris, Tokyo Disneyland, or Shanghai Disneyland.

Do you want to see Peter Pan’s Flight reimagined to remove Tiger Lily’s scene? Let us know in the comments below.

Editor’s Note: The opinions in this article do not necessarily reflect those of Inside the Magic overall.