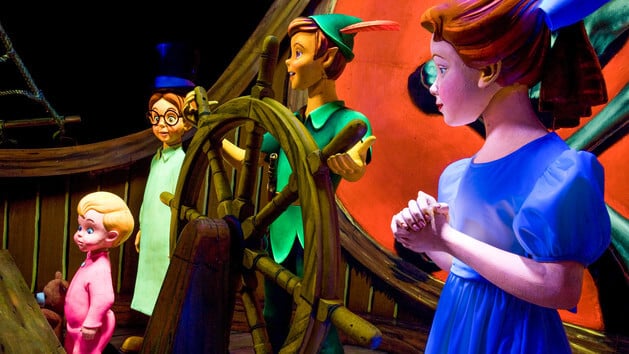 To start, I just want to say that I absolutely adore Walt Disney, Peter Pan is one of my favorite Disney animated films, Tinker Bell is my all-time favorite character, and I love Peter Pan’s Flight as an attraction overall.

Just hear me out on this one.

With average wait times of over an hour at both coasts, Guests of all ages are always eager to take the flight to Neverland and visit with Peter, Wendy, John, Michael, Tink, and others. But is it worth waiting for that long? Personally, I say no.

Again, as I mentioned earlier, I absolutely adore the fact that this was an opening day attraction for Disneyland and that it’s based on the 1953 animated classic, Peter Pan. Tinker Bell has, and always will be, my all-time favorite Disney character. And I love the fact that you board a flying pirate ship and soar over the elements of the attraction, rather than riding through the elements.

But the fact that it is averaging over an hour wait time, nearly every single day, and is only approximately a three and a half minute ride, it just isn’t worth the wait to me. Now, let me also say, there aren’t many attractions that I would wait over an hour for. But the ones I would wait for are those that are extremely unique or thrilling to me — i.e. Millennium Falcon, Mickey and Minnie’s Runaway Railway, maybe even Pirates of the Caribbean simply because of the length of the ride.

Since  Peter Pan’s Flight is such a short experience, I just can’t personally accept waiting over an hour for a three and a half minute ride. But that’s just me.

So what do you think? How long would you wait for Peter Pan’s Flight? Let us know in the comments below.

Editor’s Note: The opinions in this article do not necessarily reflect those of Inside the Magic as a whole.

If you want to visit the Walt Disney World Resort on your next family vacation, but aren’t sure where to begin planning, then don’t hesitate to reach out to our trust-worthy friends over at the Authorized Disney Vacation Planners at Academy Travel for a free quote, today!