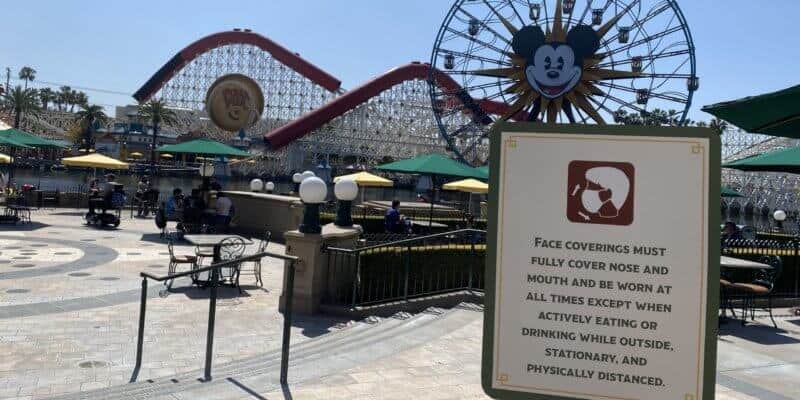 Now that Guests are allowed enter the gates of Disneyland Resort for the limited-time A Touch of Disney event at Disney California Adventure Park, we can finally check out all of the health and safety signage and sanitizers that have been put into place since July 2020, when the theme park was originally slated to reopen.

The sold out event has officially begun and Disney is taking health and safety seriously, as expected! Ticketed Guests are now able to re-enter Disney California Adventure in its entirety to enjoy the full park once again. It is worth noting that Buena Vista Street reopened for shopping and limited dining last fall, operating as an extension of the Downtown Disney District.

Although rides and attractions will not open until A Touch of Disney event has concluded and the park officially reopens on April 30, Guests can eat and drink special foods, enjoy the theming and immersion, meet characters, and just remember what it is like to step back into the magic once again after a full year of closure.

Before California Governor Gavin Newsom’s “Blueprint Refresh” that allows theme parks to reopen sooner, officials went to check out how Disneyland Resort was setting itself up to reintroduce Guests to the theme park in a safe way.

The parks — Disneyland Park and Disney California Adventure — both impressed authorities, which is no surprise after seeing what other Disney theme parks, such as Disney World, have done in terms of signage, social distancing, and mask wearing reminders.

Previously, we reported that Disneyland and Disney California Adventure already implemented tens of thousands of safety measures in the parks. Disneyland planned to install more than 23,000 health and safety measures to prepare for the future reopening of Disneyland and Disney California Adventure. As expected, these measures include health and safety signs, hand sanitizing and handwashing stations, plexiglass barriers where necessary, social distancing markers, and more.

Now, we finally got to see all of the new health and safety additions put into action — including the 1,000 sanitization stations that Disney promised!

As we entered the event, the signage began with reminders that Guests must be wearing their mask at all times, unless actively eating or drinking.

Upon entry, we can see that Guests are actively using the social distance markers that are noted on the floor.

We can see continued signage reminding Guests to keep a six-foot distance at all times.

In Cars Land we can again see more mask wear signage which has been evident throughout the park. We can also see one of the thousands of hand sanitizers ready for use. Another noticeable fact about the event is how spaced out and empty it looks. Because the event is running at such a reduced capacity, social distancing is not a difficult foot to accomplish!

Considering Downtown Disney has done a great job implementing health and safety, it makes sense that the inside of the parks have been ready to do the same. All of this is a great indication on what we can expect once both Disneyland and Disney California Resort reopen at the end of April. For now, all those visiting A Touch of Disney can rest assured that Disney is doing its best to create a safe and magical theme park experience.

What do you think of all the new safety measures implemented at Disneyland Resort?

Comments Off on Disneyland Enforces Updated Health and Safety Measures