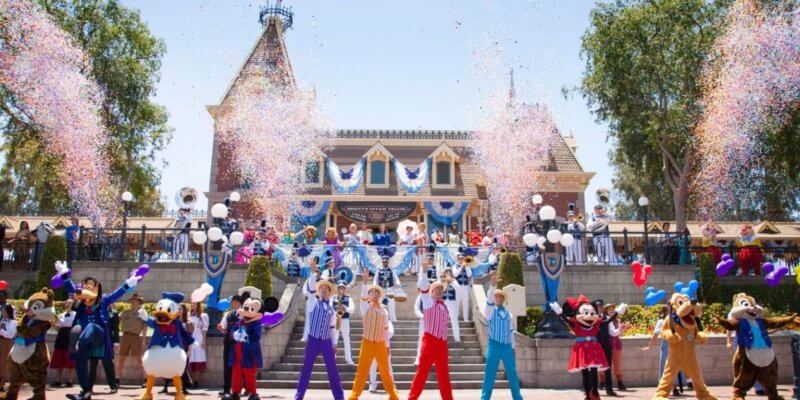 After a full year of closing their magical gates, the original Disney Resort, Disneyland, is finally ready to allow Guests back in to experience the magic!

We have everything you need to know about the reopening of Disneyland.

However, it has taken California Governor Gavin Newsom several months to update the theme park reopening guidelines to the “Blueprint for a Safer Economy” which will now allow California theme parks to open on a much more expedited timeline. As we know, Disneyland will reopen to 15% capacity in tier 2, 25% in tier 3, and 35% in tier 4, and California residents will be the only Guests who will be allowed to visit for the time being. You can read more about this here.

Now that Disneyland is reopening, let’s take a look at what Guests can expect in this pandemic-era theme park world. Here is what we know and what Disney has shared.

Yay! Characters will be back at Disneyland. It seems that Disneyland is planning on following suit to Disney World when it comes to reintroducing characters into the parks. There will not be the typical meet and greets that we are used to, but there will be fun character interactions guaranteed.

As we have reported, both Disneyland and Disney California Adventure plan to ensure that Guests will be able to see their favorite pals, but it will not be how they are used to:

From surprise appearances along Main Street, U.S.A., and Pixar Pier to playful interactions, characters from dozens of favorite Disney and Pixar stories will entertain and delight guests across both parks. Beloved characters will pop up in new ways and sometimes in unexpected places as they remain mindful of physical distancing.

At Disneyland, guests may see Mickey Mouse and Minnie Mouse waving from the train station, or Disney Princesses such as Mulan appear at the Royal Theatre to wave and pose at a distance for guests taking selfies. At Disney California Adventure, Pixar pals may wave from the bandshell at Pixar Pier, and guests can share a laugh while taking photos with Mater and Lightning McQueen along Route 66 in Cars Land.

It will be exciting to see how characters pop up around both theme parks, and how they can interact with Guests.

Now, Disney has announced that the attraction will be reopening with Disneyland on April 30. Disney described the reimagining as:

As if one year of no Disneyland wasn’t enough to persuade Guests to visit the parks — now there is a newly reimagined attraction to experience!

Speaking of attractions, there is so much more to experience at both parks! This will be the first time attractions have run at Disneyland theme parks since March 2020, which means almost every attraction will feel brand new.

Classic and favorite attractions will begin to open at both parks—from epic experiences like the new Star Wars: Rise of the Resistance to family-friendly experiences like Peter Pan’s Flight and Inside Out Emotional Whirlwind—plus new magic is coming to Haunted Mansion.

Although we are currently unsure how Guests will be loaded on attractions exactly, there will surely be a difference. When Disney World reopened, Guests were socially distanced, and on some attractions, they continue to be! Parties are not mixed with others in the same row anymore, and at times, the entire attraction is not even loaded.

Because of this, Guests should expect to wait longer to board an attraction as there is also sanitation that takes place periodically, which can elongate boarding times. The queues will also be socially distanced, so when you see what appears to be a huge line, just know there are six-foot gaps between each party!

This is something we already knew Disneyland and Disney California Adventure would implement upon reopening, similar to the Disney Park Pass reservation system that Disney World Guests have been using. That being said, we do not know specific details on exactly how to obtain the passes yet, just that they will be needed to enter the parks.

Today in the announcement, Disney reiterated that fact and explained all the information that they have readily available to share.

Because theme park capacity will be significantly limited to comply with governmental requirements and promote physical distancing, the Disneyland Resort will manage attendance through a new theme park reservation system that requires all guests to obtain a reservation for park entry in advance. To enter a park, both a park reservation and valid admission for the same park on the same date are required for guests ages 3 and up. Theme park reservations will be limited and subject to availability and, until further notice, only California residents may visit the parks in line with current state guidelines. More details about this new reservation system will be available soon.

According to the official Disney Parks Blog announcement:

The health and well-being of guests and cast members remain a top priority.

At this time, you cannot book a stay at Disney’s Grand Californian Hotel & Spa, but Inside the Magic will continue to give you all the updates on when you can finally book at the Hotels of the Disneyland Resort once again. Disney’s Paradise Pier Hotel and the Disneyland Hotel will reopen at a later date.

Guests with valid theme park admission who are planning a stay at a Disneyland Resort hotel will need to also book theme park reservations in advance, as a hotel stay does not guarantee a park reservation. Hotel capacity will be limited.

The health of Guests and Cast Members has always been at the forefront of Disneyland’s mind. Months ago, state officials even checked the parks for their health and safety measures, and at this point, it seems as though parks passed with flying colors! We have already seen plenty of signage in stores and around the park, hand sanitization and handwashing stations around every turn, as well as plenty of social distancing markers.

Here is what Disney has shared:

The health and well-being of guests and casts members remain a top priority. Just as the Downtown Disney District reopened at Disneyland Resort on July 9, 2020, with enhanced health and safety measures, operational changes will be in place at the theme parks and hotels based on guidance from health authorities and learnings from our parks around the world to promote physical distancing, enhanced cleanliness and reduced contact. Cast members throughout the resort will be dedicated to assist with questions, and guests may check Disneyland.com/update for the most current health and safety measures, including mandatory face coverings for guests ages 2 and older.

When I think of Disneyland, I instantly think of all the delicious food offerings that are available at the parks! Now, Disneyland is making sure Guests know that “DOLE Whip, corn dogs, and churros are fun treats offered alongside memorable dining experiences that include lobster nachos and novel drinks at Lamplight Lounge, brisket mac & cheese at River Belle Terrace and Mediterranean-California fare at Carthay Circle Lounge– Alfresco Dining” will all be available!

It seems that as the COVID-19 cases continue to lower, Orange County is getting ready to soon allow for indoor dining, which will open up a lot more offerings and reservations for Disneyland Guests.

Mobile ordering will also be a big service that Guests can take advantage of. This will shorten wait times, limit interaction, and, you won’t need to wait in a line full of people.

Aside from all of this, Cast Members will get a preview of the parks before Guests are once again allowed in, which is very exciting for Cast Members! As we also reported, Disneyland will not have any nighttime or crowd gathering shows for the time being, much like Disney World has held off on the same entertainment offerings.

Are you excited for Disneyland to re-open? What do you think of Disney’s plan?

If you want to start planning your return to Disneyland, click here!

Comments Off on What to Expect When Disneyland Reopens