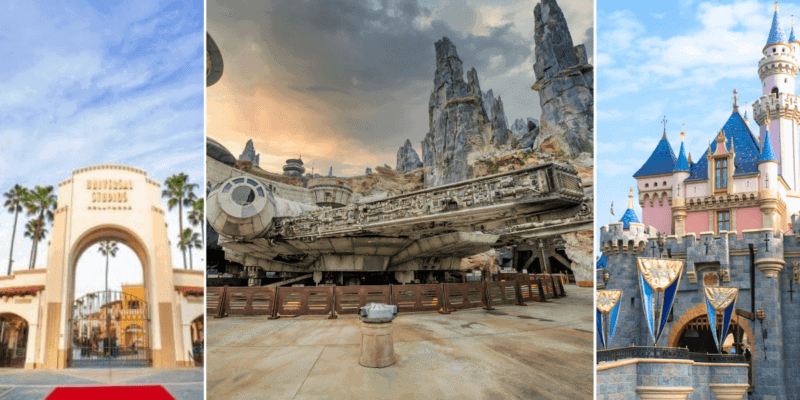 This is a huge week for California theme park news.

On Thursday, both Disneyland Resort and Universal Studios Hollywood began selling tickets for their new limited-time events, during which Guests will be allowed to shop and dine — but not ride any attractions! — inside the parks.

Based on the new rules, the theme parks of the Disneyland Resort and Universal Studios Hollywood ( as well as other parks like Knott’s Berry Farm, Six Flags Magic Mountain, Legoland California, SeaWorld San Diego, and more) are allowed to reopen as early as April 1.

But what does it all mean, and where will Disney and Universal go from here? Let’s break it down.

As reported, there are some huge changes in the guidelines for reopening theme parks in California.

Previously, the guidelines were as follows:

Now, things have significantly changed. Below are is a glimpse of the new guidelines:

Additionally, the Blueprint For a Safer Economy has been updated to reflect this “Blueprint refresh.” The website stated, “The guidance is in the process of being updated. Check CDPH’s activity and business tiers table for information about the upcoming changes.” So, we have included the tiers table below so you can see how the old guidelines compare to the new ones. Note that the old guidelines are described under “Current” and the new ones are listed under “Effective April 1, 2021.”

As officials shared, “Regardless of trigger being met, these activities (amusement parks) cannot begin any sooner than April 1, 2021.”

Note that neither Disneyland Resort nor Universal Studios Hollywood has offered specifics regarding how they will operate according to the new guidelines outlined by the State of California. However, we expect more information to be released in the coming days and weeks.

Since the guidelines were released, Disneyland Resort President issued the following statement:

Although this is a positive response to the “refresh” of theme park reopening guidance, it is not a reopening date, leaving many still questioning, When will Disneyland reopen?

Fans are already speculating what these guidelines mean for the new limited-time event coming to Disney California Adventure, A Touch of Disney. Due to popular demand, Disney extended ticket availability for the now-sold-out event. So fans will be visiting the Southern California theme park destination for A Touch of Disney from March 18 through April 18 on select days throughout the week.

But since the theme park reopening guidelines indicate that the Southern California Disney Parks could reopen as early as April 1, does that mean that Disney will cancel A Touch of Disney in April and refund tickets, or opt to reopen Disneyland in early April and Disney California Adventure later on in the month, after the ticketed event has concluded? Alternatively, could Disney decide to run A Touch of Disney through April 18, allowing all Guests who purchased tickets to experience the event, and then reopen both theme parks fully at the end of April or early May?

Right now, any of the options above seem possible, but it’s important to keep in mind that none of them have been confirmed or even hinted at by Disney. The only thing we know for certain is that Disneyland Resort plans to announce a reopening date soon, now that the guidelines allow theme parks to reopen when the county in which they are located reaches tier 2 (instead of tier 4, as previously required).

Universal Studios Is “Ready to Reopen”

Universal also shared a response to the new guidelines to reopen theme parks, which would allow Universal Studios Hollywood to reopen as soon as Los Angeles County reaches tier 2 (both LA County and Orange County are in tier 1 currently).

“We are ready to reopen, ready to bring our team members back to work, ready to help stimulate the local economy and ready to welcome guests,” said Universal Studios Hollywood President Karen Irwin.

On Thursday, March 4 — the same day that tickets went on sale, and later sold out, for A Touch of Disney at Disney California Adventure — Universal Studios Hollywood began selling tickets for their own event, Taste of Universal. The park is still selling tickets for select dates from March 12 through April 4, and so far there is little indication that the event will be canceled.

Similarly, fans are wondering, how will Universal Studios approach reopening? It seems likely that the theme park destination will operate for shopping and dining only with the Taste of Universal event through early April. So, we can probably expect a reopening date to be announced very soon, possibly for the second week of next month.

While Universal Studios Hollywood has not yet announced a reopening date, the theme park is known for dropping huge news without much notice, so there is a strong possibility that we could be getting an announcement from Universal before we get one from Disney. We’ll have to wait and see.

As mentioned, the new theme park reopening guidelines allow California parks like Disneyland, Disney California Adventure, and Universal Studios Hollywood to reopen in tier 2, meaning it could only be a matter of weeks before they reopen their gates and begin allowing Guests to ride their favorite attractions again. When official reopening dates are revealed, we will be sure to share the big news.

What do you think of these new guidelines? Are you excited for theme parks in California to reopen soon? Let us know in the comments.