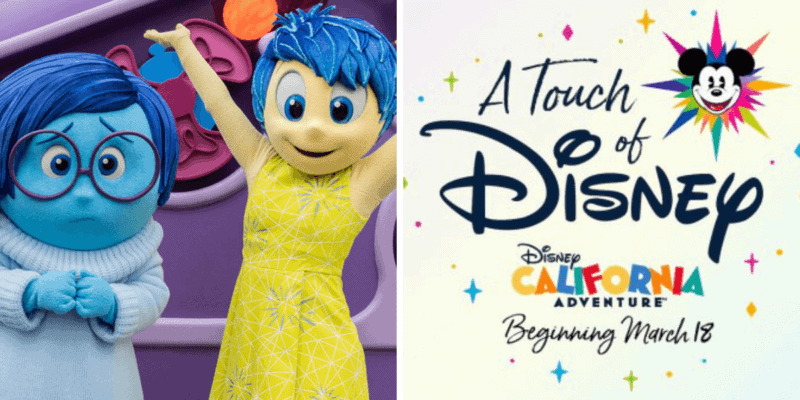 Now that the news has broken about A Touch of Disney at Disney California Adventure, fans are beginning to share their thoughts as to whether or not the ticket price is worth the experience.

This new Disney event focuses on food and beverage from Disneyland Park and Disney California Adventure Park, Disney character experiences, Disney merchandise, and Disney magic. There are plenty of fans who are excited about the experience and are looking forward to a piece of the Disneyland Resort once again but there are some who are disappointed about what exactly will be open and available at DCA.

A Touch of Disney

For the price of admission, $75 will include the following on select days (Thursday-Monday) as the Downtown Disney District will continue to operate seven days a week.

Some of the food items expected to be on the event menu include Dole Whip, the classic Monte Cristo sandwich, and much more. An outdoor dining area was added near Pixar Pier to be able to enjoy that Disney atmosphere once more. The latest Disney merchandise will be sold at select retail locations including Bing Bong’s Sweet Stuff.

Is The DCA Event Worth The Price?

Fans have taken to Reddit to share their thoughts on this new event. For what’s included in the ticket price, some are willing to be able to pay the price to be able to explore the entirety of Disney California Adventure again, even if the price seems a little high.

Well, that is true except for Avengers Campus because we’ll have to wait a little while longer for that one.

On the other hand, there are some Disneyland fans who do not share the same enthusiasm. Even though they are missing Disneyland as well, they aren’t willing to pay the $75 for what’s being included, but one fan said they would if it were at Disneyland Park.

It has been compared to the food only event at Knott’s Berry Farm and how Buena Vista Street and Downtown Disney have been currently operating.

One Disney Cast Member Weighs In

A Disney Cast Member even shared some insight on why A Touch of Disney is worth the $75. As this Disney experience is recalling 1,000 Cast Members back to work, Cast Members are the ones who truly make the Disney magic happen.

Some have been waiting nearly a year to be able to spread the pixie dust once again. One Reddit user commented with something to keep in mind for those who will be attending the event.

But before we go, we thought we needed to share some of the humorous responses that Disney fans have reacted with. A Reddit user asked if we were going to get the five senses of California theme parks.

On another Reddit post, a Reddit user asked why the lady in the marketing image below for A Touch of Disney was eating her lollipop like a “psychopath”. By far, this is one of the funniest reactions to A Touch of Disney, as well as, quite the conversation starter, in my opinion.

Either way, many Disneyland fans agree that whether they are willing to pay for the event or not, they believe the tickets will sell out.

What are your thoughts on this new Disney experience? Are you willing to pay the $75 to enjoy the golden touch of a Disneyland Resort theme park once again? Share your thoughts in the comments below!