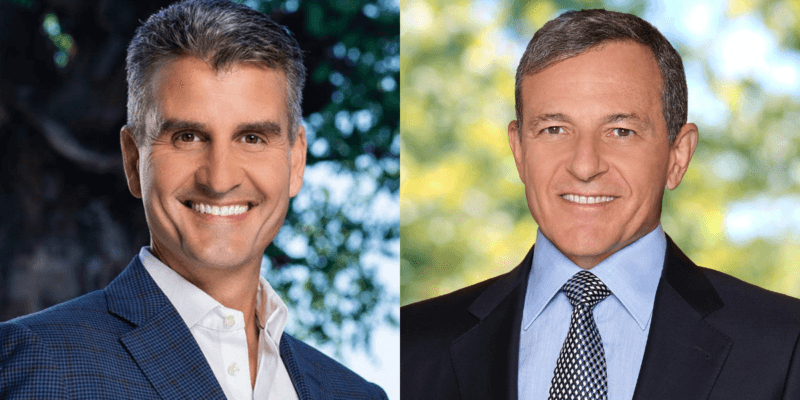 Two executives of The Walt Disney Company were spotted this morning at the Downtown Disney District at Disneyland Resort in Anaheim, California!

We are encouraged by the announcement today that California theme parks now have a path forward toward opening responsibly this spring and getting thousands of people back to work.

I wish I could have walked every property and thanked all of our Cast, Crew, Imagineers and employees around the world in person. I want to share my sincere appreciation to everyone in our organization, working and furloughed, who is part our magic!

Lifestyle blogger and social media influencer (and longtime Disney Cast Member!) Jason Sasaki took to his Instagram @sasakitime to share the news and a photo of his greeting with D’Amaro and Iger.

Good morning from Downtown Disney with @joshdamaro and Bob Iger

As shared by the Disney Parks Blog, Disney is celebrating Employee Appreciation Day. Sasaki took to his Twitter to share the same image, along with hashtags in honor of this special day in celebration of Disney Cast Members.

As the Chairman of Disney Parks, Experiences and Products (and the former President of Disneyland Resort and Walt Disney World Resort) Josh D’Amaro frequents the Disney Parks and often documents his experiences. Even with Disneyland Park and Disney California Adventure Park currently closed for almost a year — and as Walt Disney World Resort continues to operate amid the ongoing pandemic — D’Amaro has continuously popped onto Disney property both in California and Florida to greet Disney Cast Members as well as Guests.

Related: D’Amaro Optimistic For Disney Parks in 2021 and Beyond

Similarly, Executive Chairman and former Chief Executive Officer of The Walt Disney Company Bob Iger stays up-to-date with operations across all Disney Parks and Resorts. Though it is rare to see Iger strolling around a Disney Park on an everyday basis, many fans, Cast Members, and Guests love running into the Disney executive when they have the opportunity to.

D’Amaro and Iger’s visit to Disneyland Resort property is timely with the news surrounding A Touch of Disney, the new ticketed event coming soon to Disney California Adventure Park. As Disneyland Resort Cast Members are prepping for that event opening on March 18, it’s not too surprising to see these Disney executives visiting this week.

Currently, the Downtown Disney District is open to Guests for shopping and dining at a limited capacity, and Guests can get special discounts if they are Legacy Passholders. Read the latest operational updates on the Disneyland website.

We’ll keep you updated on the latest Disney news — let us know in the comments who you’d love to run into at the parks one day!