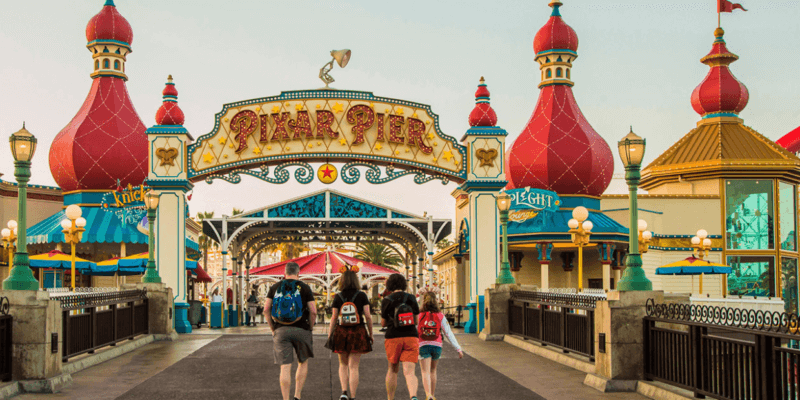 Starting March 18th, 2021, Guests will once again be roaming the walkways of Disney California Adventure for the limited-time ticketed event, A Touch of Disney. This will end free access to Buena Vista Street, but open up more opportunities which include dining at Lamplight Lounge.

After Disney announced what would be available for A Touch of Disney, fans spoke out on whether it was worth the price of $75 entrance fee which includes parking, $25 food credit, and unlimited PhotoPass downloads. The consensus is that whether some fans are willing to go, most believe this will be a sold-out event.

A Touch of Disney Food

Disney is bringing a lot of the foods fans have missed from Disneyland Park and Disney California Adventure Park to A Touch of Disney. From Dole Whips to Mickey Pretzels, Half Monte Cristo Sandwiches, and the infamous Jumbo Turkey Leg, Guests will be treated to the tastes and smells of the Disneyland Resort once again.

Even though no attractions will be available, Guests will be immersed in Disney experiences like characters and other open-air experiences safely that they haven’t been able to at the Happiest Place on Earth in one year. There is plenty of excitement surrounding the food that’s coming to this event, but there are still a few much-loved food items missing from the menu for A Touch of Disney!

Missing from Disneyland Park are the Mickey-shaped Beignets from New Orleans Square! From Disney California Adventure Park, where are the Jack-Jack’s Cookie Num Nums?

We will have to wait and see if Disney decides to add these to the event at a later date.

This fried dough Mickey covered in powdered sugar is usually why you’ll find a long queue outside the window of the Mint Julep Bar. Upon leaving the window Guests will usually have a paper bag full of Mickey Beignets in one hand and a refreshing Mint Julep in the other. Plenty of napkins are needed to enjoy this sugary treat that has fun seasonal flavors throughout the year.

This ooey-gooey soft dish chocolate chip cookie is one of the most Instagram-worthy treats of Pixar Pier. The best way to watch the Incredicoaster wiz by with Guests screaming at the top of your lungs is to have Jack-Jack’s Cookie Num Nums in hand.

Where Can You Get Beignets and Jack-Jack’s Cookie Num Nums?

Well, they may be missing from A Touch of Disney, but they don’t have to be missing from your life. The Downtown Disney District will remain open seven days a week and Ralph Brennan’s Jazz Kitchen is serving up some delicious Beignets. Head over to Ralph Brennan’s Jazz Kitchen Express for their new Snicker-Doodle Glazed Beignets. For Jack-Jack’s Cookie Num Nums, you don’t even need to leave your home. Well, you might to head to the grocery store if you don’t have ingredients on hand, but you can bake this yummy dessert at home!

Are you looking forward to A Touch of Disney? Let us know in the comments!