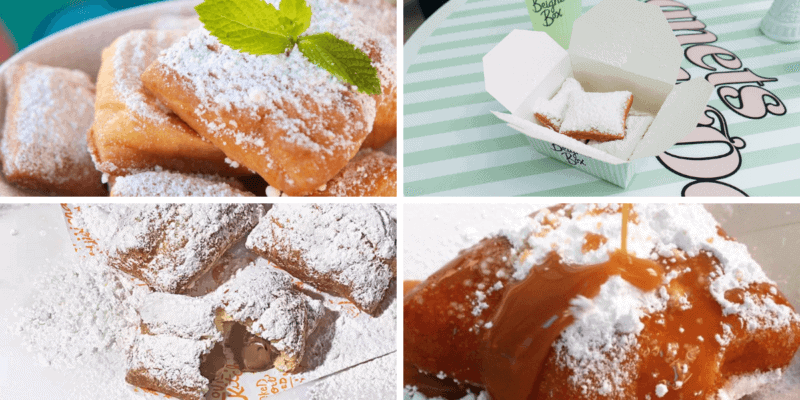 We’re all missing those hot sugary Mickey-shaped Beignets from New Orleans Square at Disneyland Park. Since the Disneyland theme parks are currently closed, many Disney lovers are left with the cravings of beignets and the memories of making a serious mess of their fingers and clothes with all the powdered sugar.

Don’t worry, we all just thought Princess Tiana pulled you into the kitchen to help with those beignets or at least that’s what we want everyone to think when that happens to us. Yes, we’ve all been there and done that.

Beignets Outside of Disneyland

We’ve got your back, beignet-loving folks! There happens to be some awesome places you can find beignets to satisfy that sweet tooth. Don’t forget, you can turn beignets into a family activity and make homemade ones. They do take a little time to make and you might not want the clean-up duties afterwards, so in that case, hop in your car and head over to one of these venues. Even Princess Tiana has found her way to one of hot spots so it’s verified yummy!

Many head down to the Downtown Disney District to get a dose of The Happiest Place on Earth’s magic. One of the restaurants is serving up some Bayou sweet magic, and it’s, you’ve guessed it, Ralph Brennan’s Jazz Kitchen. They’re serving up delicious savory meals like Gumbo Ya-Ya, Pasta Jambalaya, and NOLA BBQ Shrimp and Grits. Now, they’ve added onto the menu and brought on the dessert of New Orleans, beignets. The Original New Orleans Beignets are available for mobile ordering and takeout from both Ralph Brennan’s Jazz Kitchen and Jazz Kitchen Express!

Food trucks have been the latest cuisine craze across the United States and the Los Angeles, Southern California area has definitely got a ton of them from hidden dives to social media favorites. So, of course there’s a beignet food truck. It’s literally called The Beignet Truck. You can find them serving up made fresh to order Beignets in Los Angeles along with coffee, hot chocolate, and a side of pizzazz!

Because the stars have aligned to bless Southern California, there are not only one, but two, beignet food trucks in the Greater Los Angeles area! Princess Tiana has even made a stop here herself for some beignets and sweet tea. The Beignet Box is co-founded by Elizabeth Morris and actress, Christina Milian. Stop by for some beignets or beignet bites with a perfectly paired drink.

Those who aren’t in the Southern California area don’t have to feel left out, because this fast food chain is now serving beignets nationwide. Popeyes Louisiana Kitchen, known for their fried chicken, has added a new item to their menu, chocolate filled beignets. So, roll on through the drive-thru or online order for pick-up. Whichever you choose, make sure to ask for lots of napkins in your bag!

Alright, if you don’t feel like getting out of your jammies or comfy clothes, you can make beignets at home and really actually make them into Mickey-shaped beignets. There’s options for these too! A recipe for the original Mickey-shaped Beignets are finger licking good, but some might find that the Gluten Free Beignets recipe from Walt Disney World are the way to go, or head over to the fancy part of New Orleans Square, Club 33, try the recipe for their delicious Pumpkin Beignets.

Anyone jumping in their car to go pick up some beignets now, or grabbing all the ingredients to make them in your home kitchen? Let us know in the comments if you try any of these sweet options!

Comments Off on Where to Find Beignets Even if You Can’t Go to Disneyland!