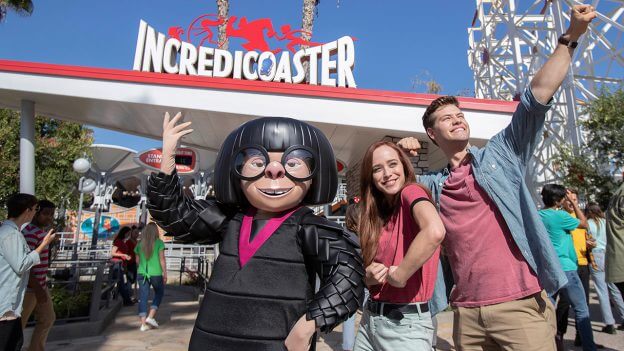 Now that we know Disneyland Resort is officially going to be reopening on April 30 with a number of restrictions in place, future and returning Guests are now wondering exactly what to expect.

If we look to the East Coast, Walt Disney World Resort already had to undergo the challenges of reopening for the first time during a pandemic, with a focus on what was going to be safe for Guests and their Cast Members.

One thing that many Guests, including myself, were glad that Disney World was able to still include was having characters around the parks. Although meet and greets with close contact, such as hugging Mickey Mouse, are still a thing of the past at Disney World, character interactions and cavalcades are the new form of character entertainment.

At Disney World, Guests can either see their favorite characters from afar, like seeing Mickey Mouse and Minnie Mouse on the Walt Disney World Railroad balcony, or on a cavalcade which run through each park in their own way throughout the day. Although there are no parades, there is almost always a character visible somewhere in the park, which keeps the magic alive.

There are even some character interactions that allow Guests to take selfies with characters — like the new Donald Duck and Daisy Duck appearances at Disney’s Hollywood Studios!

Now that Disneyland Resort is set to reopen, it seems that both Disneyland and Disney California Adventure plan to ensure that Guests will be able to see their favorite pals, but it will not be how they are used to:

From surprise appearances along Main Street, U.S.A., and Pixar Pier to playful interactions, characters from favorite Disney stories will entertain and delight. Beloved characters will pop up in new ways and sometimes in unexpected places as they remain mindful of physical distancing.

From surprise appearances along Main Street, U.S.A., and Pixar Pier to playful interactions, characters from dozens of favorite Disney and Pixar stories will entertain and delight guests across both parks. Beloved characters will pop up in new ways and sometimes in unexpected places as they remain mindful of physical distancing.

At Disneyland, guests may see Mickey Mouse and Minnie Mouse waving from the train station, or Disney Princesses such as Mulan appear at the Royal Theatre to wave and pose at a distance for guests taking selfies. At Disney California Adventure, Pixar pals may wave from the bandshell at Pixar Pier, and guests can share a laugh while taking photos with Mater and Lightning McQueen along Route 66 in Cars Land.

Now, Guests will have the ability to feel surprised by a pop-up appearance of their favorite character as they are back in the parks. As Disney has noted, all characters will “remain mindful of physical distancing.” So, it seems that at Disneyland and Disney California Adventure, just as we saw at Disney World, characters will likely be greeting Guests from a distance, either from up above, on a vehicle like the ones on Main Street, or in an area that will be blocked off from foot traffic.

With the A Touch of Disney event also bringing out characters for Guests to see in the upcoming weeks, that will be a good gauge to see what Disneyland is planning to do in terms of introducing characters back into the parks in a safe way.

The exciting thing about this, even though Guests won’t be able to get too close to characters, is that this is all brand new! As Disney noted, characters will pop out from unexpected places and in new ways. Considering many Disneyland locals have been to the parks many times in the past (and many are likely Legacy Passholders), finding a new way to experience Disneyland is truly a treat.

Stay tuned to Inside the Magic for all of your Disneyland reopening news!

Do you like the idea of characters popping out as you walk around Disneyland and Disney California Adventure?

Click here to book your trip so you can visit Disneyland Resort as soon as the theme parks reopen! With Downtown Disney, Disneyland, and Disney California Adventure available, there is so much to see and do! On the other hand, maybe you want to also go to Hong Kong Disneyland, Shanghai Disneyland, Tokyo Disneyland, Disneyland Paris, or Disney World. Academy travel can help with all your planning.