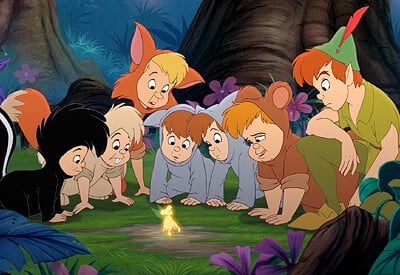 In April 2016, Disney announced that they would be doing another remake of the classic Walt Disney Animation Studios film, Peter Pan.  Peter Pan & Wendy was originally scheduled to begin production in April 2020, but it had to be delayed due to the pandemic. Production officially began in March 2021 in Vancouver, Canada. The movie remake is set to be released on Disney+ in 2o22.

While Disney has kept pretty mum on what direction the film will be going in, we do know that they will be making a MAJOR change when it comes to The Lost Boys — a group of young children who live in Neverland and call Peter Pan their leader. In past movies, The Lost Boys have always been that — boys. However, with Disney’s recent casting announcement, it has been revealed that there will be several young female actresses who will be playing Neverland orphans.

According to The DisInsider, the character of Cubby has been renamed Curly — which is the character’s original name in the book by J.M. Barrie. Cubby will be played by Florence Bensberg, who is only 10 years old.

More Lost Boys casting revealed that The Lost Boy Twins — most known in the original film for their matching raccoon costumes — will be played by real-life twins, Skyler and Kelsey Yates. The Yates twins are most noticeably recognized for playing the twin daughters of Terry Crews on the hit show Brooklyn Nine-Nine.

While these characters may be different from past Peter Pan remakes, they are characters that viewers are familiar with. Along with diversifying The Lost Boys, it appears that Disney may also be adding some new ones to the group. Additional casting was announced for a new character named Birdie, who will be played by young actress Diana Tsoy, and Bellweather, who will be played by Felix De Sousa.

Due to the fact that Disney has cast a number of young actresses in the new film, it does seem that they will have to change the name of The Lost Boys. Lost Children perhaps? Lost Kids? We will have to wait and see!

Peter Pan & Wendy will also star Alexander Molony as Peter Pan, Ever Anderson as Wendy, Jude Law (Captain Marvel) as the nefarious Captain Hook, and Jim Gaffigan (Luca) as his bumbling but loyal sidekick, Mr. Smee. Disney has not released an official release date, just that the movie is expected to premiere sometime in 2022.

Are you excited to see some new faces in The Lost Boys group? Let us know in the comments!