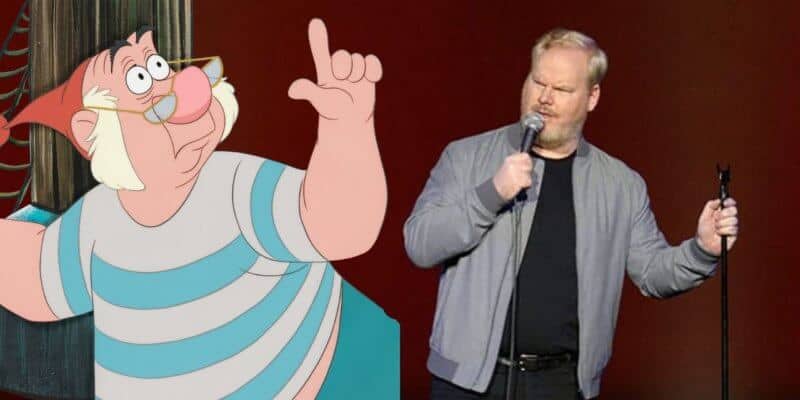 Disney has been creating highly successful live-action films as of late, and one of the next is a remake of Peter Pan called Peter Pan & Wendy. We already know of a few confirmed actors and actresses for the upcoming film but now we have another Hollywood star to add to the cast list who is surely going to give us a few laughs.

Captain Hook (who is reportedly going to be played by Jude Law) needs a trusted sidekick, even if he is not very useful at sea! Mr. Smee fills that description quite perfectly, and it has now been announced by The Wrap that comedian Jim Gaffigan (The Jim Gaffigan Show, Bob’s Burgers, and more) will be stepping into the role.

Interestingly enough, as perfect as Gaffigan seems for the role, it seems he was not the first pick. We previously reported that it was speculated Nick Offerman (Parks and Recreation) was offered the role. However, if this were true, it clearly did not come to fruition.

Another actor who was reportedly considered for Smee was Brendan Gleeson (best known for his role as Mad-Eye Moody in the Harry Potter films). That being said, it looks like Disney went with popular comedian Gaffigan in the end, which I personally think will be a fantastic choice!

Who else will be starring in this live-action remake you ask? Well, Disney has now rounded out the majority of the leading cast for Peter Pan & Wendy. Grown-ish‘s Yara Shahidi will play the role of the moody yet cute pixie, Tinker Bell — A casting decision that has many fans quite excited to see on-screen. Disney has also cast Alexander Maloney as Peter Pan and Ever Anderson as Wendy.

Disney’s Peter Pan and Wendy will begin production in 2021, under the direction of David Lowery. Lowery has also directed the live-action Pete’s Dragon for Disney, so he is no stranger to the world of live-action films.

The film was originally meant to have a theatrical debut, but like many other Disney films such as Mulan and Soul, Peter Pan & Wendy will be releasing on Disney+. Whether or not this will come at a cost as Mulan did, or will be streamed for free like Soul is still a question at large, however, it is confirmed that the film will be accessible from the comfort of Disney fan’s homes!

Pinocchio is currently also undergoing a live-action remake and will head straight to Disney+ just as Peter & Wendy. The live-action version of The Little Mermaid, however, is still set to have a theatrical release.

Stay tuned to Inside the Magic as we continue to keep you updated on all Disney films and television series in development!

Do you think that Jim Gaffigan will play the perfect Mr. Smee? Let us know your thoughts on Disney’s casting below.