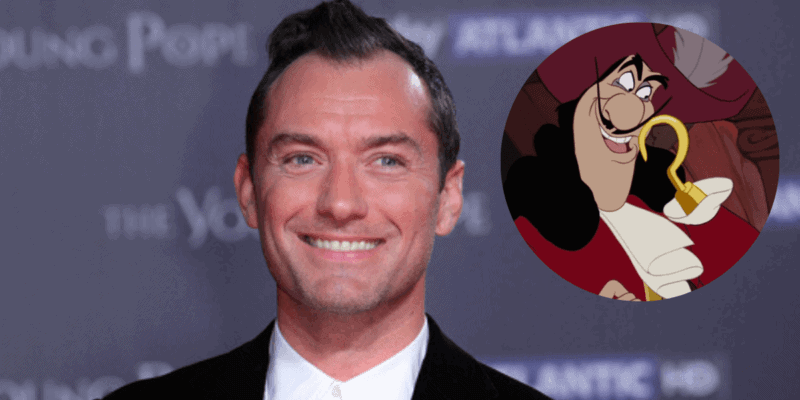 We’re off to Neverland! Or at least, Jude Law is. The well-known actor is reportedly in talks to play the infamous Captain Hook in Disney’s newest live-action remake of Peter Pan, Peter Pan and Wendy, according to Variety.

The live-action Peter Pan will be another one of Disney’s retellings of the stories written by J.M. Barrie. The original book follows a boy named Peter Pan who lives in Neverland, where children never have to grow up. Joined by the fairy Tinker Bell, Peter meets the Darling children in London and brings them to his world, where they have plenty of adventures, encounter mermaids and the Lost Boys, and even meet Captain Hook and his pirate crew.

We’ve been following the news of the live-action Peter Pan remake closely for months. And now, Law is reportedly in discussions with Disney to take on the role of Hook.

Jude Law has been nominated for two Academy Awards. He has had roles in the Fantastic Beasts series, Captain Marvel, Sherlock Holmes, among countless other films and TV shows.

If Law does sign with Disney for the Peter Pan remake, he will become the most recent actor to portray Hook in a retelling of the beloved Peter Pan story. Others in Hollywood who have taken on the role include Dustin Hoffman, Jason Isaacs, and Hugh Jackman.

Variety’s sources also report that the live-action remake of Peter Pan will not be released on Disney+ at first, and it will instead look forward to a theatrical release. Keep in mind, however, that Disney has not shared any details yet regarding the exact plans for Peter Pan and Wendy‘s release — we don’t even have an exact release date, yet.

So who else will star in the upcoming film? Well it’s already been announced who will take on the lead roles of the titular characters Peter Pan and Wendy Darling.

Alexander Molony is set to play Peter Pan himself. He previously acted in the British Sky One series The Reluctant Landlord. He’s also worked with Disney in the past in Claude, a Disney Junior series.

Daughter of actor Milla Jovovich and director Paul W. S. Anderson, Ever Anderson has been selected to play Wendy. Ever has had limited roles starring in Resident Evil: Final Chapter where played thee younger version of her real-life mothers’ character. She also stars in the upcoming Black Widow movie as a younger version of Scarlett Johansson’s character.

It’s also been rumored that Margot Robbie could take on the role of Tinker Bell. There was also a rumor that Joaquin Phoenix could play Hook himself.

David Lowery of Pete’s Dragon will be the director of Peter Pan and Wendy. Lowery co-wrote the script with Toby Halbrooks. Jim Whitaker is producing.