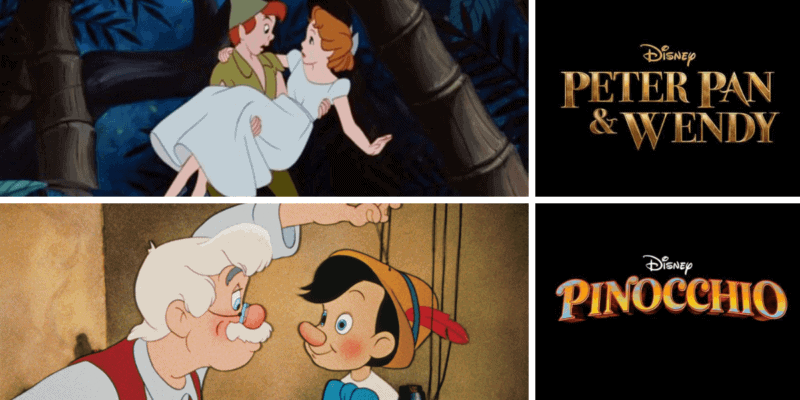 Amid the whirlwind of The Walt Disney Company’s 2020 Investors Day, Walt Disney Studios confirmed that two live-action remakes will be skipping theaters and heading straight to Disney+.

Peter Pan & Wendy and Pinocchio will both be exclusive to the Disney+ streaming service when they are released in the near future. A Disney+ release was rumored for these two films, in particular, so the announcement did not come as a surprise for many fans, though we do welcome all of the original content heading to the streaming service over the next several years.

Below is everything we know about these films so far, as well as their title reveal videos that were presented during Investors Day and shared across Disney’s social media platforms.

Peter Pan & Wendy will be flying to #DisneyPlus. David Lowery directs an amazing cast including @YaraShahidi in the role of Tinker Bell and Jude Law as Captain Hook.

Peter Pan & Wendy will be flying to #DisneyPlus. David Lowery directs an amazing cast including @YaraShahidi in the role of Tinker Bell and Jude Law as Captain Hook. ?? pic.twitter.com/U8tWoxxSOk

Peter Pan & Wendy will be a new live-action reimagining of the classic Peter Pan story by J.M. Barrie. So far, the film already has a star-studded cast, with Yara Shahidi as Tinker Bell and Jude Law as Captain Hook. Alexander Molony with be playing Peter and Ever Anderson will be playing Wendy, with David Lowery — who co-wrote the script with Toby Halbrooks — directing, and Jim Whitaker producing.

A release date for Peter Pan & Wendy has not yet been announced.

Below is an official description for Disney’s Peter Pan animated film, though we expect the live-action version may differ:

In this Disney animated film, Wendy (Kathryn Beaumont) and her two brothers are amazed when a magical boy named Peter Pan (Bobby Driscoll) flies into their bedroom, supposedly in pursuit of his rebellious shadow. He and his fairy friend, Tinkerbell, come from a far-off place called Neverland, where children stay perpetually young. Enchanted, the kids follow him back. But when Pan’s nemesis, the pirate Captain Hook (Hans Conried), causes trouble, the kids begin to miss their old life.

One of Disney’s all-time classics is coming to #DisneyPlus with the new live-action retelling of Pinocchio, starring Tom Hanks and directed by Robert Zemeckis.

One of Disney’s all-time classics is coming to #DisneyPlus with the new live-action retelling of Pinocchio, starring Tom Hanks and directed by Robert Zemeckis. ✨ pic.twitter.com/44bHbFRhMe

There has been a lot of hype for the live-action version of Pinocchio as well since it will be a retelling of a classic tale that so many longtime Disney fans know and love. The film will star Tom Hanks as Gepetto, a role that was rumored for quite some time before it was finalized. Like Peter Pan & Wendy, Walt Disney Studios has not yet shared an exact release date for the live-action Pinocchio.

Below is an official synopsis of Disney’s animated classic Pinocchio to give you an idea of what to expect in a remake of the film:

When the woodworker Geppetto (Christian Rub) sees a falling star, he wishes that the puppet he just finished, Pinocchio (Dickie Jones), could become a real boy. In the night, the Blue Fairy (Evelyn Venable) grants Geppetto’s wish and asks Jiminy Cricket (Cliff Edwards) to serve as the wooden boy’s conscience. But the naive and trusting Pinocchio falls into the clutches of the wicked Honest John (Walter Catlett), who leads him astray to the sinful Pleasure Island.

Unlike Peter Pan & Wendy and Pinocchio, other live-action films will be heading to theaters before they are released on Disney+. The live-action Little Mermaid film starring Halle Bailey as Ariel will be hitting theaters within the next couple of years. You can read the official cast list for The Little Mermaid here.

What do you think of Disney’s live-action remakes? Are you excited for more to be coming to Disney+? Let us know in the comments,

Comments Off on Two Live-Action Remakes Heading Straight to Disney+