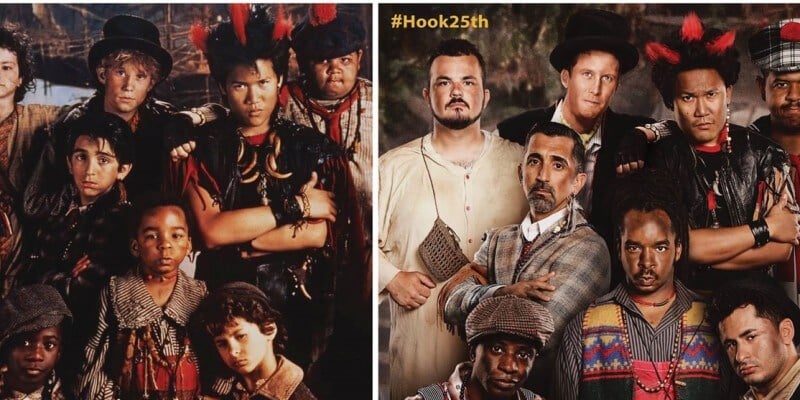 Steven Spielberg’s movie ‘Hook’ starring Robin Williams and Dustin Hoffman is one of those nostalgic classics that still lives on with most of us. It has been 25 years since this lovable movie about Peter Pan was in theaters and the original ‘Lost Boys’ from the movie decided to put on a little reunion to celebrate the occasion. ET went backstage during the throwback photo shoot, where the actors also decided to recreate each of their characters’ classic looks from the movie. When shooting the movie, the young ‘Lost Boys’ stars ranged in age from six to 17 so revisiting their old costumes, with stomach baring tops and Mohawks, was quite the trip down memory lane for them.

Brian Pocrass, CEO/Producer of 22 Vision, had this to say about putting together the long awaited reunion:

“Hook is just one of those movies that people really grew up on. To get them together to remember Robin and celebrate this milestone is something that I loved being a part of.”

One thing was sadly missing from this great ‘Lost Boys’ reunion and that was their leader himself, Peter Pan, that was played by the late Robin Williams. This week marked the second anniversary of Williams’ death and he was on the mind for all the guys as they also wanted this to be a tribute to him.

“I think for all of us [Robin’s death] was the death of our childhood,” Dante Basco who played ‘Rufio’ said. “There’s sadness there, also there’s a lot of space to kinda celebrate one of the most legendary artists of our time.”

Watch the video below to hear more from the cast and their memories with Robin on ‘Hook’. To find out what the cast has been up to since 1991 visit ETonline.com.