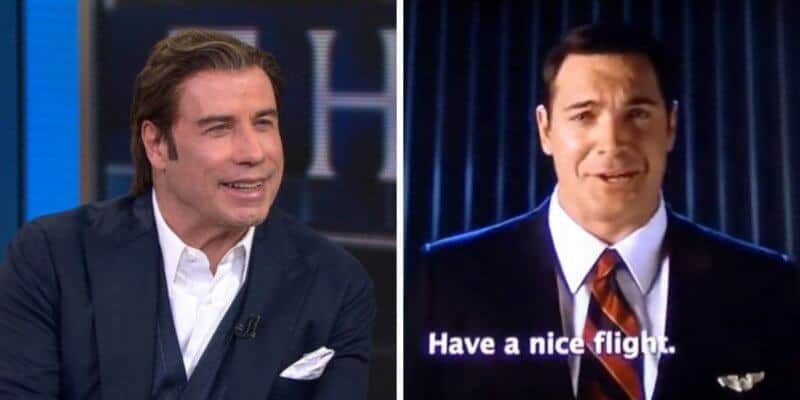 “Hello, and welcome to Soarin’. My name is Patrick, and I’ll be your chief flight attendant today.”

That is the famous first line of the Soarin’ pre-show (for both Soarin’ Over California and Soarin’ Around the World) at Disney California Adventure at Disneyland Resort and EPCOT at Walt Disney World. We can’t imagine anyone else besides Patrick Warburton taking on this role, but believe it or not, Warburton wasn’t even considered at the beginning of the hiring process. So, how did Patrick land this iconic role?

Well, Disney Imagineer Jim Clark recently took to Twitter to share the backstory of the Chief Flight Attendant role, how Patrick Warburton got the job, and what changed when hiring the iconic actor for the pre-show of the Disney attraction, an opening day ride for Disney California Adventure.

“Two months before DCA opened, we still hadn’t shot the preshow,” Clark wrote on Twitter. “John Travolta was interested, but his movie’s schedule was making it difficult, plus he had this little beard. Our little team was invited to a screening of Emperor’s New Groove, and we were all laughing at Kronk.”

Two months before DCA opened, we still hadn’t shot the preshow. John Travolta was interested, but his movie’s schedule was making it difficult, plus he had this little beard. Our little team was invited to a screening of Emperor’s New Groove, and we were all laughing at Kronk. pic.twitter.com/KPtWnznfdc

He continued in a thread of Tweets to discuss how Travolta almost took on this role and the flight attendant was even named Sandy initially. This was with Travolta in mind for the role and it was a nod to Oliva Newton-John’s character, Sandy, in the film.

But as Clark said, Travolta’s filming schedule made it difficult to coordinate for the Disney pre-show, plus, he had the small beard that Disney Imagineers didn’t like for the flight attendant role. So, they all went to a screening of Disney’s Emperor’s New Groove and immediately fell in love with Warburton’s Kronk character, and the rest is history.

If you want to take a flight on your next Disney World vacation to see Chief Flight Attendant Patrick, be sure to get in touch with our friends over at Academy Travel who will help you plan every aspect of your magical vacation.

Can you picture anyone else playing the Chief Flight Attendant in the Soarin’ pre-show? Let us know in the comments below.