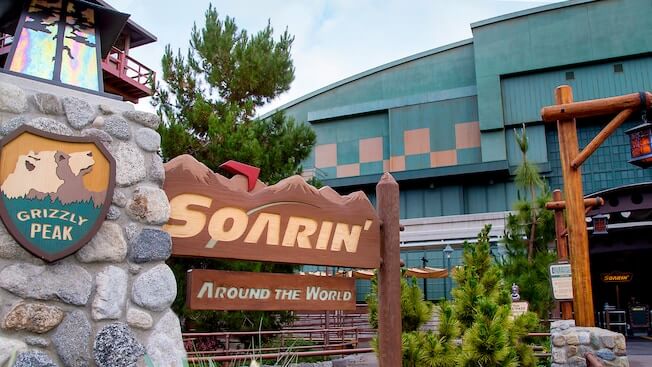 Disneyland officials confirmed in a report by the OC Register that Soarin’ Over California will return to Disneyland Resort for the Disney California Adventure Food & Wine Festival this spring. As we reported yesterday, the attraction will be available for Guests to experience from February 28 through April 21, 2020.

Fan feedback on Soarin’ Around the World has been mixed since the film made its debut in 2016, with many fans calling for Disney to bring Soarin’ in its original format, Soarin’ Over California.

Disney seems to be listening to fans, and if rumors are true, they will be bringing back the original attraction at Disney’s California Adventure, at least temporarily.

Disneyland Resort will be hosting its annual Food & Wine Festival. It looks as if Disney might be bringing back the attraction as part of the Festival, which is themed after embracing California culinary flavors. This isn’t the first time Disney has tried this after bringing the attraction back last June to overwhelmingly positive praise from regular park-goers. This time, the California version of the fan-favorite Soarin’ attraction will reportedly be running at Disney California Adventure for the Food & Wine Festival: February 28 through April 21.

If this goes ahead, it will make Disneyland fans incredibly happy as sights such as the Golden Gate Bridge, Orange Groves, and Yosemite National Park will all return as seen from a hang glider with a bird’s eye view.

For fans of other Disney Parks like EPCOT and Tokyo DisneySea, sadly, we’ve heard no such reports that the attraction will not be returning to its original form in other parks. Still, Soarin’ Around the World remains incredibly popular outside Disney California Adventure Park. After all, as long as Patrick Warburton remains a chief flight attendant, we don’t mind what version is showing!

Annual passholders at the theme Park will welcome the return of the original attraction if it goes ahead. We wonder if the Imagineers will keep an eye on the popularity to see if it’s worth running both versions concurrently in the future. Either way, this sounds like a great way to direct Guests away from Disneyland Park after the recent addition of Ris of the Resistance with Star Wars fans flocking to central Park.

I, for one, would welcome the orange scent of Los Angeles and Golden Gate over the heavy use of CGI seen on the Taj Mahal and the Great Wall of China.

Remember that Disney has not publicly confirmed that Soarin’ Over California will be returning to Disney California Adventure. Still, we will update you as soon as we find out more information.

What are your thoughts? Will you be heading to Disney California Adventure to experience the return of the original attraction if it returns, or are you happy with Soarin’ Around the World? Let us know in the comments below!