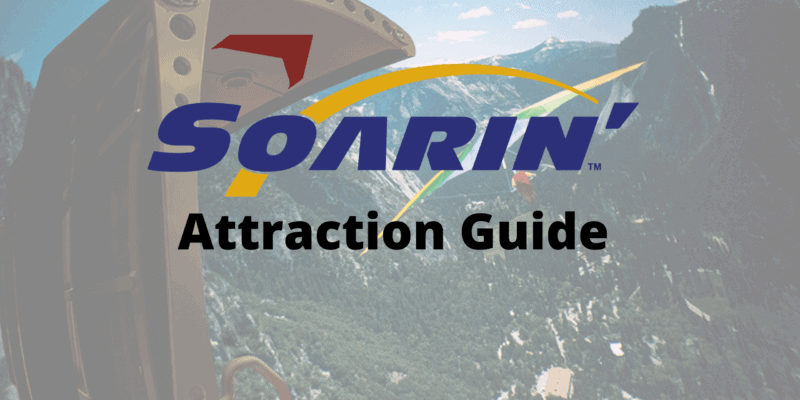 In this guide to one of the most popular attractions at any Disney theme park, we are going to take you through everything you need to know about the ride. This guide will include Soarin’s incredible history, how it began as Soarin’ Over California and transitioned into Soarin’ Around the World, and answers some of the biggest questions that guests have on the attraction.

In addition to Orlando and Anaheim, versions of Soarin’ also exist in Shanghai Disneyland Park and Tokyo DisneySea.

If you wanted to jump into a specific section, just click on one of the links below:

Soarin’ is a simulated hang glider tour of some of the most popular destinations across the planet and can be found at EPCOT (within The Land pavilion), Disney California Adventure, Shanghai Disneyland, and Tokyo DisneySea. The attraction uses motion, scents and wind effects to create the feeling of flight as guests take in an aerial view of the world shown on a 180-degree, 80-foot IMAX digital projection dome.

Related: Why EPCOT is still worth your time during construction

While it still feels that Soarin’ opened only yesterday, the attraction was an opening day attraction when Disney California Adventure opened its doors back in 2001. Of course, back then guests were Soarin’ Over California and not around the world, but the attraction proved to be so popular over at the Disneyland Resort that versions of the attraction opened in EPCOT in 2005, Shanghai Disneyland in 2016, and Tokyo DisneySea in 2019.

The original four-minute 51-second film had guests flying high above California in the following locations:

It was the scents that really made this attraction and took the ride from being a standard screen-based ride to something truly magical. Scents included in the original Soarin’ Over California attraction:

In addition to the locations and scents, Soarin’ also showcased some of the varied recreational activities in California and included:

The first time riding Soarin’ was like nothing else we’d experienced before on a theme park attraction back in the early 2000s, it really was a bit of Disney magic.

In addition to the wonders of the attraction itself, Patrick Warburton played Chief Flight Attendant in one of the best pre-show videos in the history of Disney Parks. A role that thankfully Disney kept as part of the upgrade to Soarin’ Around the World.

Soarin’ Around the World

The updated version of Soarin’ first debuted at Shanghai Disneyland as Soaring Over the Horizon back in June 2016 and then on the very next day Soarin’ Around the World first opened at Disney California Adventure and EPCOT. Due to the popularity of the attraction at EPCOT, a third theater was added to allow for better crowd control and shorter queues.

The following locations are present during your travels on Soarin’ Around the World:

Though it still hasn’t been confirmed, scents used for Soarin’ Around the World include grass, jasmine and a tropical/ocean blend.

FastPass is available for Soarin’ across every Disney Park where the attraction is located. While it is still an incredibly busy attraction during peak times of the year, most of the time you won’t need a FastPass to enjoy the attraction, particularly in EPCOT and Disney California Adventure.

That being said, Soarin’ is one of the most popular attractions in DisneySea and it is worth a FastPass consideration.

Will Soarin’ Make me Sick?

Soarin’ Around the World is unlikely to make you sick unless you have a pre-existing condition. If you suffer from motion sickness or a fear of heights then this attraction is likely not for you.

From our experience, while the flight is a lot of fun, it’s not intense.

Are there height restrictions?

Yes, the height requirement for Soarin’ is 40″ (1o2cm). This means that most children above 4-years-old should be able to ride the attraction without any issues (going by height averages).

Can I ride Soarin’ When Pregnant?

The official line from Disney on this is that you shouldn’t ride the attraction when pregnant.

There are many fans that have come out and said they’ve been on the attraction several times when pregnant but just remember to trust your gut and remember the warning is there for a reason.

Can I FastPass Soarin’ and Test Track?

No, you have to choose either Soarin’ or Test Track as both of these attractions sit within Tier 1 of Epcot’s FastPass+ attractions.

Related: How to get a high score on Test Track at Epcot!

Can I FastPass Soarin’ and Frozen?

The same applies to Frozen Ever After as both attractions sit within the same Tier. Our recommendation would be to choose Frozen over Soarin’ as it is highly likely to be the busiest attraction at the park.

Patrick Warburton, famous for starring in Family Guy, Rules of Engagement and of course, The Emperor’s New Groove.

Here he is in action:

Is Soarin’ Around the World Scary?

It’s only scary if you have a fear of heights! Otherwise, it is one of the most enjoyable attractions in the history of Disney Parks and you have nothing to worry about!

Do you have further questions you want answering about Soarin’? Ask us anything in the comments below and we will add the answer to our guide!