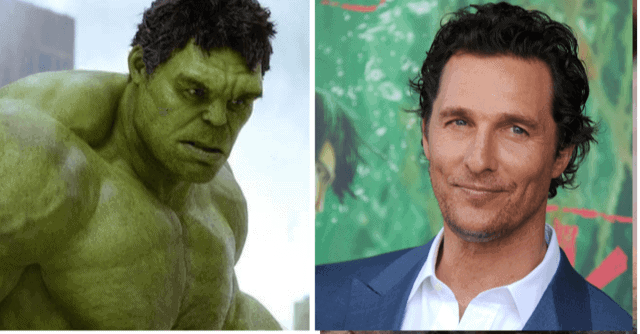 With Marvel Studios beginning Phase 4 of the movies and series, fans are getting their fill of the MCU. The same MCU that started this whirlwind success just a little over a decade!

In 2012, we were introduced to Marvel’s The Avengers. All of these superheroes and cast that would become household names. It’s hard to imagine the cast any different — until now!

We’ve recently learned, thanks to the folks over at the Happy Sad Confused podcast that Bruce Banner, also known as the Hulk (currently played by Mark Ruffalo), could have been played by Academy Award winning actor… Matthew McConaughey?!

Thinking about how calm and subdued Marvel’s Bruce Banner has to be as to not incite his Hulk side, it’s kind of hard to compare that to the intense dramas the actor is known for. The Oscar wining McConaughey tried to get in on starring in The Incredible Hulk, which ended up going to actor Edward Norton.

Still, he was persistent in actively pursuing the role further when talks of Marvel’s The Avengers came around. Turns out, it had nothing to do with his acting style or his previous dramatic roles. According to McConaughey, Marvel just wasn’t interested. Here’s how the interview went with McConaughey in the podcast:

Interviewer: You never got your chance to play Bruce Banner, or David Banner in the show, did you?

McConaughey: No, I didn’t.

Interviewer: Did you throw your hat in the ring? Did you say, “I’m game if you guys are?”

McConaughey: They said, “No, thank you.”

Interviewer: Can’t get’em all, I guess.

Matthew McConaughey didn’t go into much more detail about his exchange with Marvel. However, with all the success he’s had thus far, he seems fine with Marvel’s decision. And who knows, maybe we will see him in some other facet of the Marvel Cinematic Universe-perhaps a film or Disney+ series.

Who do you think makes the perfect Hulk: Edward Norton, Mark Ruffalo, or Matthew McConaughey? Let us know in the comments!