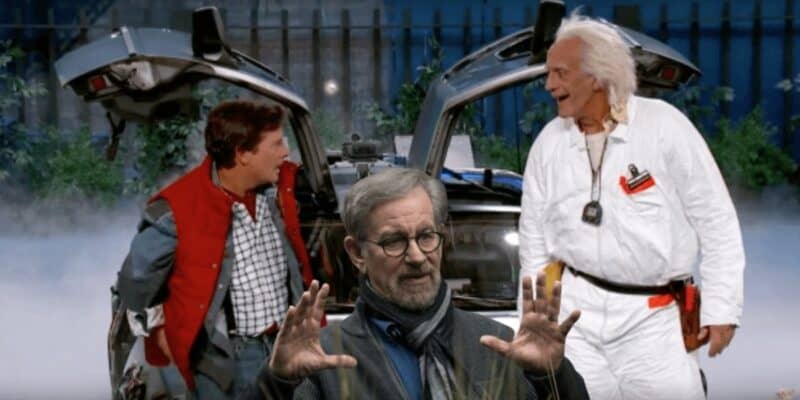 A select number of filmmakers have a legacy so great; almost everyone knows them and has watched their work. If we were to make a list of some of the most notable directors, Steven Spielberg would surely make a list.

When it comes to Spielberg, not only do movie lovers have him to thank for endless classics, but Universal theme park fans can say thank you to him for his contribution to so many attractions! From Jaws to Men in Black to E.T. the Extra-Terrestrial to Jurassic Park, and so much more — Steven has truly had a hand in shaping the IP that many Universal fans know and love. He even directed Transformers: The Ride!

Another classic and cult-favorite film franchise that Spielberg helmed was Back to the Future. The trilogy starring Marty McFly ( Michael J. Fox) and Doc Brown (Christopher Lloyd) was an instant success. It even transpired into a Universal Orlando Resort attraction (which has sadly become extinct at this time).

Interestingly enough, while sitting in the auditions to cast some of the characters, Spielberg, who is used to standing behind a camera, could not stand that someone else was filming. When an actor goes into an audition, they will be met with the casting director, and depending on the audition; they may also have producers of the film and the director sitting in. Next to them is someone operating the camera, and a reader, who plays the scene partner for the auditioning actor off-screen.

When Claudia Wells auditioned for the role of Jennifer Parker in Back to the Future, she recalled Steven telling the camera operator that they had to leave.

It’s interesting, I actually had one audition only. Everyone was there. I remember Steven Spielberg kicked out the cameraman probably five minutes into it. He said, “I can’t have a camera out here without being behind it and in charge of it. So you need to leave.” The guy was so surprised.

From this, we can clearly see how seriously Spielberg takes his craft of filmmaking. Hopefully, the cameraman was not too upset with being kicked out of the room!