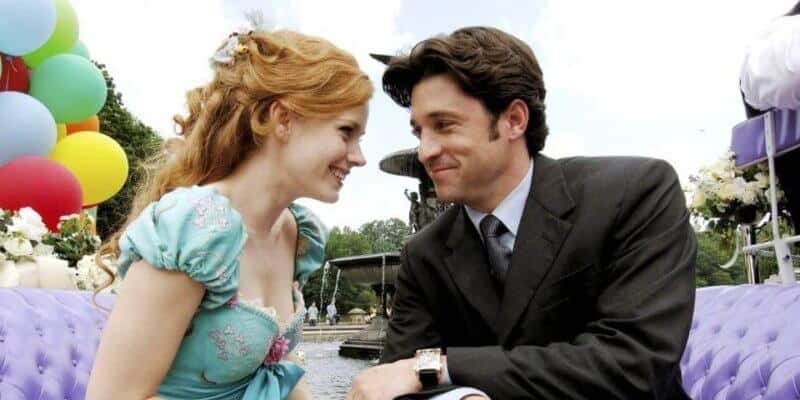 Today is a big day for Disney+! Disney+ is celebrating its 2nd anniversary with Disney+ Day by sharing all sorts of new releases and exciting news. So far, we’ve enjoyed the new short film, “Ciao Alberto” along with the Disney+ original film, “Home Sweet Home Alone“. But the fun doesn’t stop there! Disney has revealed a first look at the Sanderson Sisters in their upcoming “Hocus Pocus 2” film. Now, Disney is sharing a few more details about their highly-anticipated upcoming “Enchanted” sequel, called Disenchanted.

The popular fairy tale film, Enchanted became a fan-favorite when it was released in 2007. The sweet Giselle (Amy Adams) and handsome Robert (Patrick Dempsey) won over the hearts of many rather quickly. The music, the humor, the love story, and the action made the film a huge success. So, of course, when Disney announced a second film was in the works… we were thrilled!

While we don’t know too much about Disenchanted just yet, we do know the story premise follows fifteen years after Giselle (Amy Adams), Robert (Patrick Dempsey), and Robert’s child Morgan (Gabriella Baldacchino) move to a new house in the suburb of Monroeville. Malvina Monroe (Maya Rudolph) oversees the neighborhood and seems to have nothing but cruel intentions towards Giselle’s new family. When Giselle wishes their lives were a perfect fairytale, things go very wrong as the spell backfires. Can Giselle save her family and the Kingdom of Andalasia before the clock strikes midnight?

Now, Disney is revealing a first look at the “Disenchanted” logo along with a brief message from Amy and Patrick.

Disney+ took to Twitter to announce, “Amy Adams and @PatrickDempsey are sharing a bit of magic straight from Andalasia! #DisneyPlusDay #Disenchanted” along with the brief video below. Plus, you’ll also see below the tweet, “Magic is in the air #Disenchanted is coming to #DisneyPlus Fall 2022 and you can stream Disney’s #Enchanted NOW! #DisneyPlusDay” with the reveal of the Disenchanted logo.

Looking good Amy and Patrick! These two wowed us in Enchanted and we know they will do the same when Disenchanted debuts. Fall 2022 is shaping up to be an exceptional time for Disney film lovers!

Are you looking forward to Disney’s upcoming film, Disenchanted?

Comments Off on ‘Disenchanted’ Logo Revealed, Along With Message from Amy & Patrick!