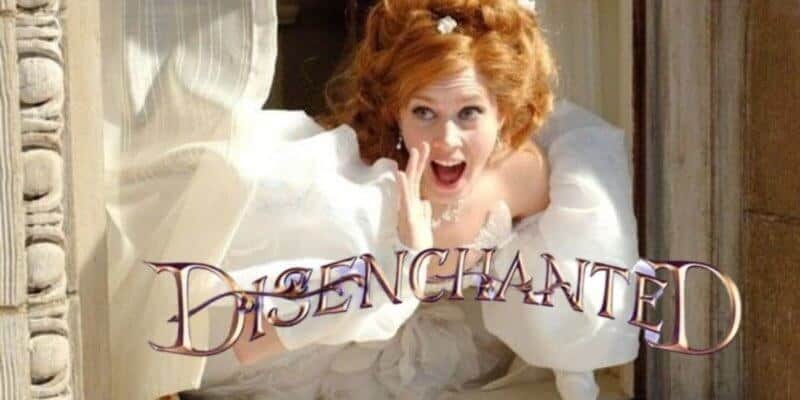 The live-action musical comedy Enchanted, which once “Enchanted” Disney fans with a storybook fairy tale come to real life, has now officially begun production and has released a date for the sequel called “Disenchanted”.

In a Disney+ News Press Release, Disney+ shares all the details and old and new characters as they state,

Can’t wait for you to see #Disenchanted, coming to@DisneyPlus
in 2022! -Amy & Adam

The kingdom loves new visitors! Let’s bring @YNB (Yvette Nicole Brown), Jayma Mays, @kolton_stewart and @OscarNunezLA too. Plus, we are SO excited to introduce @gabbaldacchino as Morgan!

Can’t wait for you to see #Disenchanted, coming to @DisneyPlus in 2022! -Amy & Adam pic.twitter.com/27ohIsm1PT

Disney+ has just announced that “Disenchanted” will be exclusively added to their streaming service in 2022! This will be an incredible addition to the Disney Plus family as Director Adam Shankman and Producer Barry Josephson tells the Disney+ news release,

“Working again with Disney has been like coming home,” says director/producer Adam Shankman. “With Amy and this extraordinary cast, Alan and Stephen’s mind blowing new score, and Barry and Disney’s support, I just hope to bring magic and joy to audiences around the world.”

Producer Barry Josephson says, “I guess dreams do come true…producing ‘Enchanted’ was the most rewarding film experience I’ve ever had. I’m so excited for Adam Shankman to begin filming ‘Disenchanted.’ I want to thank everyone at Disney for supporting us all the way. Very special thanks to Amy Adams for deciding to play ‘Giselle,’ the character she created again! And we are so fortunate to have this incredible cast!”

For those who are unaware, The Enchanted Disney film tells the story of the beautiful princess Giselle (Amy Adams) who unfortunately leaves her fairy tale land due to the hands of her evil-stepmother Queen Narissa (Susan Sarandon) and is confronted by the not so fairy tale land of New York City.

While finding her way, she meets a lawyer named Robert (Patrick Dempsey) and is torn between her once fairy tale relationship with Prince Edward (James Marsden) that she left behind or pursuing a new and very real relationship with Robert in New York City.

As Disney fans are eagerly anticipating this new enchanted sequel, and Disney+ shares some important details and a description stating,

“Disenchanted” features the much-anticipated return of Giselle, the princess from the fairy tale world of Andalasia banished to Manhattan who found her real Princess Charming in divorce lawyer Robert Philip. 15 years later, Giselle moves to the suburb of Monroeville with Robert and their teenage daughter Morgan, where she must juggle the challenges that come with a new home and discover what happily ever after truly means to her and her new family.

Recently, Patrick Dempsey was seen filming in Ireland and many rumors were also being spread around social media that we might even see the Seven Dwarfs from Disney’s Snow White and the Seven Dwarfs film make a cameo appearance to Disenchanted.

Keep informed with Inside the Magic for all your updates and new information on this beloved Disney film. We can’t wait to hear new songs sung by the entire cast and watch Gabriella Baldacchino bring Morgan’s character to life as she is all grown up!

Which character are you excited to see? Let us know in the comments below your favorite Enchanted or Disenchanted character!