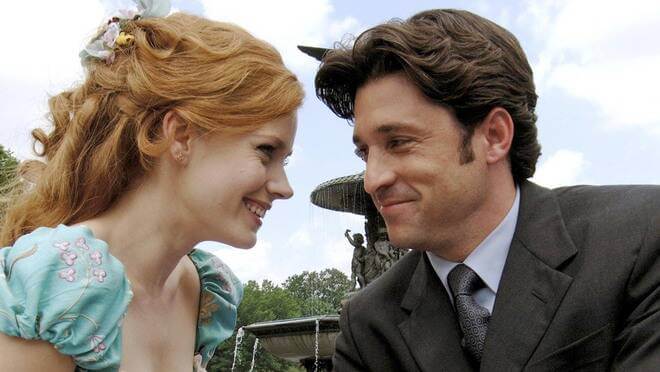 A few months ago, Disney confirmed Disenchanted, a sequel to the popular film Enchanted, will be coming soon to Disney+ and Amy Adams will be returning as Giselle! We also know that Patrick Dempsey, who plays love interest Robert Phillip, will join Adams in the upcoming sequel.

Now, as filming has begun, Patrick Dempsey is sharing his excitement and love for the set location!

Both Adams and Dempsey have been spotted in Ireland as filming for Disenchanted begins, and the Grey’s Anatomy star isn’t holding back any feelings regarding the set location. Dempsey took to Instagram to share this incredible photo along with the simple caption:

He then posted a selfie of himself in beautiful Ireland, which needed no caption.

Dempsey also posted a series of videos and pictures to his Instagram stories, according to The Irish Post, as he praised the beautiful scenery and “peaceful tranquility of the Irish countryside”. In one Instagram story, The Irish Post said that the actor could be seen “strolling down a country lane” as he shared “This place is incredible”.

From the looks of the photos from Dempsey’s Instagram, it’s safe to say the location in the film will be nothing but amazing. We cannot wait to see the upcoming sequel, Disenchanted, when it hits Disney+.

Other original cast members that fans can look forward to being involved in the upcoming sequel include Idina Menzel (Nancy Tremaine) and James Marsden (Prince Edward).

Maya Rudolph also confirmed that she will be involved in the film, playing a villain!

If you’ve never seen the original Enchanted film, it follows the story of Giselle (Amy Adams) who falls in love with Prince Edward (James Marsden) but it’s not long before his evil-stepmother Queen Narissa (Susan Sarandon) casts a spell and sends Giselle to a place where there are “no happily ever afters” — New York City.

Giselle soon meets divorce lawyer Robert (Patrick Dempsey) who isn’t so sure that her Prince is coming to rescue her.

Make sure you are signed up for Disney+ so you can watch Disenchanted, plus so much more, coming soon to Disney+! You can get started by clicking here.

Are you excited for Disenchanted? Let us know in the comments below.