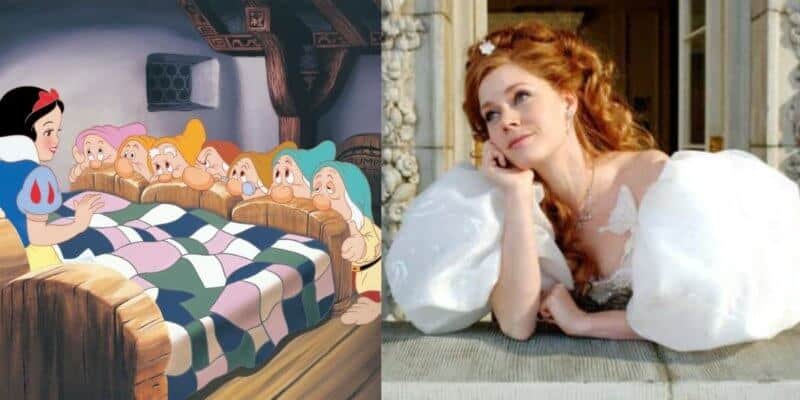 I’ll tell you a little secret. You can usually catch me singing Disney tunes while I’m busy cleaning. And, one song always seems to be stuck in my head, “The Happy Working Song” from Disney’s Enchanted (2007).

When I heard Disney was making a sequel to this movie, I couldn’t contain myself. With the announcement of Disenchanted, many Disney fans found themselves anxiously awaiting news of when this movie will be released and what new characters will be revealed.

A new online rumor is spreading quickly that the title dwarfs from Disney’s Snow White and the Seven Dwarfs (1937) may appear in the Disenchanted film. A DisInsider article shared:

We have also learned that Snow White’s seven dwarfs- Grumpy, Happy, Sneezy, Sleepy, Dopey, Bashful, and Doc- will play a pivotal role in the film including a musical number.

It is, however, important to be aware of the fact that Disney has not yet confirmed anything about the seven dwarfs appearing in Disenchanted, produced by Adam Shankman.

If this report comes to fruition, the dwarfs would join Amy Adams, reprising her role as Princess Giselle, and Patrick Dempsey as Robert Phillip.  IMDB noted:

Ten years after her happily ever after, Giselle questions her happiness, inadvertently turning the lives of those in the real world and Andalasia upside down in the process.

Filming will take place this summer in Ireland, with production scheduled to wrap in August. It will release exclusively on Disney+, likely sometime in 2022.

Keep in mind that, again, this information has not been officially confirmed by Disney.

If this rumor is true, then I am more than a little excited to have another classic Disney musical song sung by Snow White’s Seven Dwarfs stuck in my head while I work! Inside the Magic will continue to report more Disenchanted news in the future, so stay tuned.

Are you excited about the Disenchanted sequel to hit Disney Plus? Let us know in the comments below!