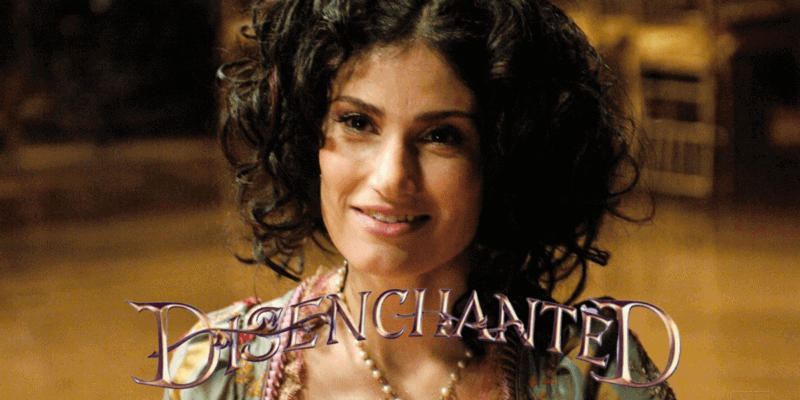 Before she became the iconic princess Elsa in Disney’s Frozen (2013), Idina Menzel played fashion designer Nancy Tremaine in the 2007 Disney film Enchanted. Menzel played the love interest — well, girlfriend — of leading man Robert Philip, played by Patrick Dempsey. Her relationship with Robert is threatened when he meets Giselle, played by Amy Adams — an optimistic girl from the enchanted land of Andalasia.

While Robert may have fallen in love with Giselle, ending his relationship with Nancy, not everything ended badly for the designer. She ended up falling in love with Giselle’s former love interest, Prince Edward (played by James Marsden), and the two run off back to Andalasia to get married and live out their happily ever after.

Idina Menzel may be known for her powerful pipes, but she did not have a singing role in the original film. However, The DisInsider revealed that that will change for Disenchanted. The DisInsider shared that Enchanted‘s original lyricist, Stephen Schwartz addressed upcoming music numbers in his newsletter, stating:

“There are seven songs plus reprises, which is more songs than the original. We wrote a song for Idina’s character in the first movie, and then they didn’t have her do it. But in Disenchanted she has one big number and part of another one.”

Schwartz went on to state that the songs in Disenchanted would feel different from the songs from the original film because he collaborated on a bigger level with the sequel film’s director Adam Shankman and screenwriter Brigitte Hales.

This is just one more detail that has been released about the Enchanted sequel. It was recently confirmed by Maya Rudolph herself that she would be playing the role of the villain in the new movie. Rudolph’s casting was announced the same day as it was announced that Yvette Nicole Brown (Big Shot) and Jayma Mays (Glee) would also be appearing in the film, but their roles are unknown.

On another fun note, it was also revealed that the Seven Dwarfs are set to make an appearance, but what part they will play is known.

Disenchanted has no official release at this time, but is expected to be released on Disney+ sometime in 2022.

Are you excited to hear Idina Menzel sing in Disenchanted? Let us know in the comments!

Comments Off on Idina Menzel Will Have Solo Number in ‘Disenchanted’