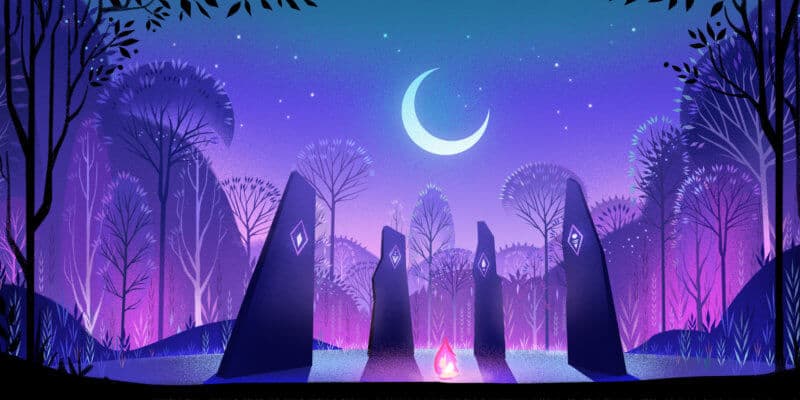 Heads up, Frozen fans. An all-new short film is coming to Disney+ — and if you loved Frozen 2 and want to dive back into the world of Arendelle and the Enchanted Forest, this is amazing news for you.

If you’re anything like me, you can’t get enough of Frozen. As a self-proclaimed Frozen superfan and Anna‘s long-lost best friend, I feel it is my duty to learn as much about this world as I possibly can. So, when I heard that Myth: A Frozen Tale was coming soon to Disney+, I knew I had to share the news with all of my fellow Frozen fans and Inside the Magic readers.

Originally produced as a virtual reality short film for devices like the Oculus, Myth: A Frozen Tale takes viewers into the world of the Enchanted Forest and tells the backstory to Frozen 2, focusing on the myth and legend behind the magical spirits we see in the Frozen sequel film.

Now, Disney’s team is making this short film available for everyone on the Disney streaming service Disney+, so you, too, can enter the world of Frozen even if you don’t have a VR headset. Although I had the opportunity to experience this short film in virtual reality, I can wholeheartedly say that it is still just as magical to view on Disney+. If you are a Disney fan who can’t get enough of this world and you wish Walt Disney Animation Studios would make a Frozen series already, you can’t miss this!

Below is the official synopsis of the new Frozen short film on Disney+:

Inspired by the exciting environments, themes and elemental characters from Walt Disney Animation Studios’ Frozen 2, acclaimed director Jeff Gipson (Cycles) brings to life this imaginative and vibrant tale set in an enchanted forest outside of Arendelle. A family gathering for an evening of bedtime stories sets the stage for a magnificent adventure to a colorful and mythical world, which includes close encounters with the Nokk (a water spirit in the form of a mighty stallion), Gale (the playful wind spirit who can manifest as a light breeze or a raging tornado-like force), the Earth Giants (the massive creatures that form the rocky riverbanks and are capable of intense destruction when awakened), and the Fire Spirit (a fast-moving and mercurial salamander named Bruni). As the story unfolds, these spirits come to life and the myth of their past and future is revealed.

Read More: “Frozen 2”: Where are we now? Elsa and Anna changed since “Frozen”

Whether you consider yourself a Frozen superfan like me, or you just want to dive deeper into this mystical world from one of the most beloved and popular Disney movie franchises, Myth: A Frozen Tale is certainly worth a watch — whether you’re a kid, a kid at heart, or a fan of Walt Disney Animation.

Inspired by Disney’s Fantasia, the works of Eyvind Earle and Mary Blair, and so much more, Myth takes viewers on a journey through the Enchanted Forest like no other. We encounter the elemental spirits that we met in Frozen 2: Bruni the salamander, the fire spirit; Nokk, the water spirit in the form of a horse; the Earth Giants, the earth spirits; Gale, the wind spirit; and, of course, the human spirit, the fifth spirit and the most elusive of them all.

Read more about the short film in the description below, provided by Disney:

Production designer Brittney Lee drew upon the Studios’ legacy of great artists (Eyvind Earle, Mary Blair, and Frozen’s own production designer Michael Giaimo) along with her own instincts to create a visual landscape that was unique in its colors, shapes and style. Just as Disney’s musical milestone, Fantasia, combined the power of music with striking visuals, producer Nicholas Russell and director Gipson, enlisted composer Joseph Trapanese (Tron: Legacy) to help them enhance the experience for Myth: A Frozen Tale. Evan Rachel Wood (the voice of Queen Iduna in Frozen 2) lends her voice as the narrator of the film. Finally, Myth is a tip of the hat to Gipson’s own family tradition of telling bedtime stories, including a particular story passed down from his great-great-great grandfather about a brush with the outlaw Jesse James when he was a young farm boy growing up near Kansas City.

Myth: A Frozen Tale arrives on Disney+ on Friday, February 26.